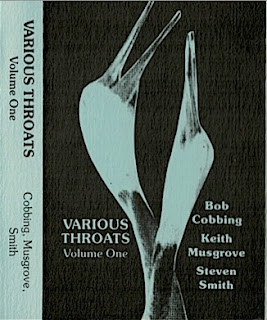 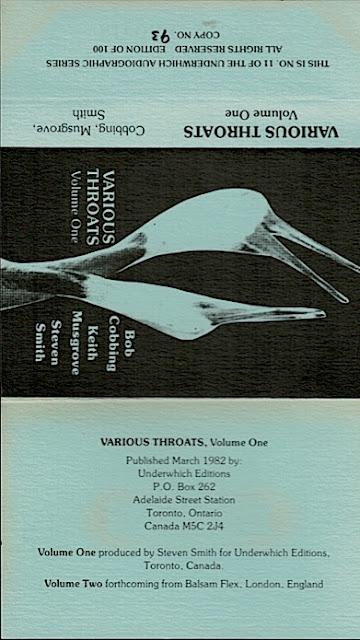 This must be what it sounds like in one of those Covid 19 temporary hospitals. Lots of coughing ,throat clearing and straining sounds. Either that or a lunatic asylum.
The oldest instrument  a human posesses is 'The Voice',or throat.Followed closely by the drum.
In fact Bob Cobbing and his canadian mates sound  like they are communicating in some ancient language. Either that or they have discovered the rosetta stone  for the language that 'Bill and Ben The Flowerpot' men spake on the BBC's watch with mother series back in the fifties.
Yet again Bob clears a room with ease.This is comfortably in the top ten of room clearing recordings, as well as  for throat clearing.
And we wonder why volume two never appeared?....or did it?

A1 Prelude: Clearing
A2 White Sound Cycle No. 5
A3 Fugitive Poem
A4 The Dream As Real
A5 Quatz
A6 Ouph/Voicings No. 5
B1 Duplicator Print
B2 Cranes Of Different Heights
B3 So Long (Geronimo)
B4 Coda: Re-Clearing

Many thanks for the posts that include Bob Cobbing and his pals. Much appreciated. Might there be some Jaap Blonk recordings waiting in the wings at the mighty DOD?

All this makes me wonder why the black metallers haven't branched out into spoken word. Could be fun. Or inane. Either's good.

There may be some Jaap on one of these sound poetry compilations, i do have a cassette of a Kurt Schwitters piece by Jaap as Reverof Zrem.....i hope that will satisfy you...that man is crazy!
I think there's some spoken word/sound poetry Doom Metal out there....as far as the Black variety....i'm scared of men with long hair who go on about a fictional bogie man aaaalllll the time in growly voices.Incredibly silly stuff.

I initially read your words as 'The oldest instrument a human posesses is 'The Voice',or threat' which puts a whole new perspective on things. Or not.It was very early in the morning and I hadn't put my clever head on.
Anyhow, appreciate this offering.
Thanks again.

Freudian in its result, your mental mix up has a ring of inner truth about it.The threat, or the voice as a threat is certainly man's oldest instrument. So keep your clever head on the shelf.....didn't worzel gummidge's 'clever 'ead' wear glasses, so it must be clever,ain't that right missus?
I'm guessing your british,if not, just ignore most of the above.