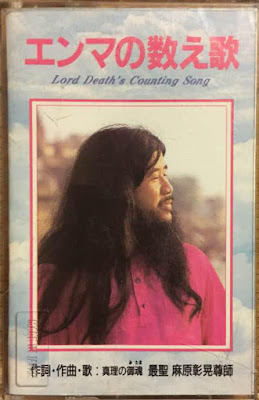 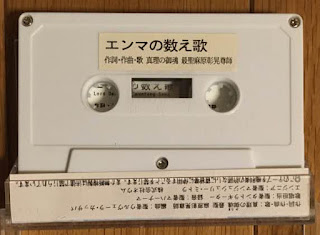 Theres not many artists featured on this blog that have been executed,but here's one,if 'artist' is the right word for a mentally ill cult leader who thought he was Jesus?

Founder and leader of the Aum Shinrikyo cult, Shoko Asahara was sentenced to die by hanging,for his role in the Tokyo subway sarin gas attacks in 1995 and was finally executed by hanging on July 6, 2018, at the Tokyo Detention House 23 years later.But,not before he treated the surviving members ofthe human race to some of his child-like songwriting skills.

He also wrote a book called "Declaring Myself the Christ",a bit shocking that, as I thought I was the Christ,not some Japanese nutjob! Ah well,I'll have to get used to being mortal again I guess!?
The music is basically as shit as his paranoid ,anti-semitic, conspracy riddled philosophy.
His purported mission was to take others' sins upon himself, and he claimed he could transfer spiritual power to his followers. He saw dark conspiracies everywhere, promulgated by the Jews, the Freemasons, the Dutch, the British Royal Family, and rival Japanese religions.Good to see he chose some different targets for a change,and also added the obvious suspects to the mix.....The Dutch!!!?
Shoko outlined a doomsday prophecy, which included a third World War, and described a final conflict culminating in a nuclear "Armageddon",Asahara often preached the necessity of Armageddon for "human relief". He eventually declared, "Put tantra Vajrayana into practice in accordance with the doctrines of Mahamudra," and he then initiated a series of terrorist attacks,culminating in the nerve gas attack in Tokyo.
Luckily his defence team didn't play his music in court or he would have been executed immediatly.

DOWNLOAD before doomsday HERE!
Posted by Jonny Zchivago at 08:21

This blog gets creepier by the day!

Come and join us brother!

You know he's right about the Dutch.
Wooden shoe agree?

Never trust a nation that has a folk tale about a young boy putting his finger in a Dyke!....now where's that Nerve gas!?

That story was an American invention. You can leave it to the Americans, whith their flimsy seawalls and levees, to dream up a silly tale like that. The Dutch are far to acutely aware of the awesome powers of the seas to conceive of it.

Come to think of it: Mr. Shoko Asahara may have borne a grudge against the Dutch for laying their filthy paws on Japanese women during the Age of Dutch Exclusive Access to Japan: http://www.akantiek.com/shunga/p2992.Chokyosai-Eiri.jpg

Even before these latest handful of shares this was my go-to place for discovering... unique stuff. Maybe I should be worried but the title track here will be a strong contender for my song discovery of the year - and if you don't mind I got a "Lord Death's Counting Song" C90 (or C60) in the making.

Also: David Koresh' music is absolute shite but I find "Adam" way more enjoyable than I ought to and "Jesus loves Me" the creepiest shit I've heard.

Disturbingly, i've found myself humming 'Book Of Daniel'(Koresh.D).....its the old human defect of once you know a background story the music becomes far more poigiant...the Nick Drake/Judee Sill syndrome...no-one gave a shit until they died...me included...i became obsessed with Judee sill after reading about her.....now i'm worried I might be the same with creeps like Koresh and Manson. Their music is absolute shite...but....!!!!????
Today i'm going through a church of scientology phase....that stuff is WEIRD!

Thanks. Spun into exxistence on our radio show... along with Koresh. Expect Hubbard in the pot. Cults groove past CAPTCHAs. If you ever want to throw a mix our way for broadcast - the portal is receptive.

Radio Panik yeah?..good stuff....i've been on there years ago for music i made in Scouts of Uzbekistan and others,not as mixer...if you want i have one ready but with myself talking on it like a proper DJ....track list:
Show Title : Dr. J. Zchivago's Hirsute Sweet Shoppe

If you want it i'll send you a link?