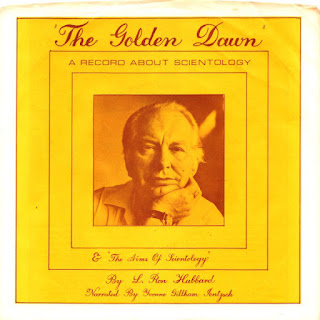 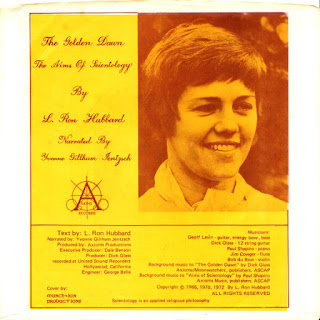 It says on the cover that "Scientology is an applied religious philosophy".They and the Buddha boys, like to use the word philosophy to give them some credibility.
At least The Scientologists admit to a religious aspect, but once a philosophy is applied, then it becomes a belief system.
That weird brainwashed sounding aussie bird,aka the Director of the "Celebrity Center for the creation of a higher Civilization(?)" is back to explain to us death fearers what its all about.

Its very meaningful sounding, but essentially meaningless reapeated platitudes from thousands of years of mankind trying to, as L. Ron says, "Salvage the Human Soul",and Hubbard is no exception when he promises eternal life within these crackling grooves.
The closing lines of side A do briefly allow us non-club members our own mind before we take the plunge,and I quote; "If you do not care to be accepted, that is your freedom"....thanks Ron,I'll excercise that freedom you have so kindly granted me....other people aren't so lucky.

DOWNLOAD another false dawn for the hive mind HERE!
Posted by Jonny Zchivago at 00:17

Thanks for this, Johnny. I:ve greedily plundered it along with the other in the present series of messiac nutters.

Around 25 - 30 years ago I was in London and a rather lovely young lady smiled at me in a way which made me think she wanted to get to know me better.

I went over to speak to her and before I knew it I was sitting in a room with other folks, all of us filling in individual questionnaires filled with cod psychology type questions.

I quickly realised that the questions were designed to push responses to extremes so I laid it on with a trowel. After I finished it, another young woman went through my responses with me, parroting the words 'Dianetics can help with that' to everything I said' in a voice which carried all the warmth and sincerity of a Sainsbury self service checkout announcing an unexpected item in the bagging area.

I was glad to leave when I did, though that first young lady was awful cute.

Hey Jonny. Haven't checked you out for a while...Your still delivering the daily scoop I see ... don't know how you keep it up!. I was pretty ignorant of the scientologists until I got interested in Kubrick's Eyes wide shut. The back story has a certain amount to do with his daughter joining them. I got the feeling it was the OTO he was calling out, with some MK ultra references thrown in as well if the jangle I was reading had any troof in it.
Anyway. I have a request, something I came across which I reckon is a box ticker for D.O.D.I.Y. Here's a copy paste from wiki that explains it:
In 1987, musician and composer Graeme Revell released an LP entitled "Necropolis, Amphibians & Reptiles: The Music of Adolf Wolfli". This was on his own Musique Brut label in London, UK in 1987. This audio compilation was based on the works Wölfli and incorporated digital renditions of Wölfli's compositions, with additional sound effects and ambient soundscapes added to the songs, by Revell, based on the artwork surrounding Wölfli's musical notations. The LP was a collection of musical interpretations by Revell as well as DDAA, & Nurse With Wound.

Ch33rs from a fellow country man living down under.

Hi qwertyuiop, of course I have it.
I assume you would like a link to download it?

Thanks. Yes, do drop the link if you can. I'm not big into industrial TBH although I do try stuff, and found a few things I like on your site (unune struck a chord with me!). Anyway, I heard about Adolf Wolfli from looking up a book called moravagine (death has a vagina!). And am a little disturbed by the repulsiveness of the man himself, but his art and his way of working is otherworldly. I will listen to a bit of the DDAA stuff you've already got up on the site first maybe. I gave some SPK and nurse with wound a go ounce or twice.... which was bearable. Much appreciated. Catch you soon.