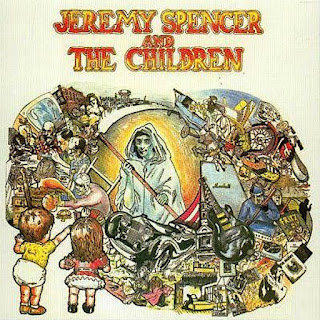 Fleetwood Mac were undoubtedly rubbish,but they did have enough personel turmoil to fill at least a few episodes of Coronation Street. Not only did group originator Peter Green go nuts and become a down and out vagrant,well before the americanised version of the group started sleeping with each other then marrying and divorcing ABBA style. Also guitarist Jeremy Spencer disappeared during a tour of the USA in the early seventies, only to turn up as a brainwashed zombie in The Children Of God cult!?
A tenure during which,after fathering various children by several different female brainwashees,or brainwashettes, he made this very Beatles-a-like album. Rather too professional sounding for my liking,made by someone who knew what he was doing....musically anyway.If you really knew what you were doing you wouldn't join one of these silly cults would you?Dear-o-dear Jeremy,what were you thinking....or not thinking in this case.I blame the drugs.

DOWNLOAD for jesus HERE!
Posted by Jonny Zchivago at 01:04

I don't think Peter Green was ever a down-and-out was he - he was diagnosed schizophrenic around the same time he renounced his wealth for religious reasons? It was another Mac guitarist, Danny Kirwan, who ended up homeless and living on the streets due to problems with alcohol rather than drugs though.

Re: Jeremy Spencer. His ongoing affiliation with the Children Of God cult is somewhat worrying considering the seriousness of allegations of sexual abuse and adult-child sexual contact that have been levelled at the organisation over the years - the numerous claims made against its original leader David Berg are certainly no laughing matter. It still exists and is called The Family International nowadays.

I remember watching that TV documentary ,or rockumetary,on Green,and he showed us the bench he used to sleep on.....or maybe i dreamt it? It might have been temporary but i reckon he spent a few nights at least homeless.
The curse of the Mac.
The 'me too' for rock is coming and i'm sure mr spencer will be at the front of the queue alongside jimmy page and bill wyman,to name just a few.