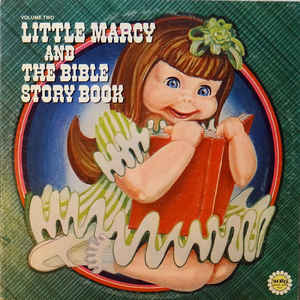 More bible stories for people with the intellect of a jellyfish,or even as low as Donald trump.
Yeah, I know its supposed to be for Kids,so I guess you can use it as a frizbee,preferably thrown against a wall so it shattered.
It wouldn't surprise me if all the shards of vinyl pulled themselves together 'Terminator 2" style, to continue the chase for our hearts and minds.

Now Little Marcy resembles a Garbage Pail Kid. She could easily been a "Maggot Marcy" or "Murderin' Marcy"... just add worms or blood - or both. But of course those Pail Kids were never Little Marcy-level creepy.

Yeah, there was an episode of 'The Twilight Zone' that had a creepy Marcy-a-like in it. "Living Doll"...."My name is Talking Tina, and I'll going to kill You'.....its a classic.
https://youtu.be/hSy8Ko1vSKQ

I remember that one. "I'm talking Tina and I don't think I like you." If only Telly Savalas' character had come to embrace the dark pit Tina came from, she might not have found it necessary to kill him. 'I love you Little Marcy. go forward and save souls for your dark master, um, I mean the lard, no, the lord’, or as it’s referred to by christians these days, “Him."