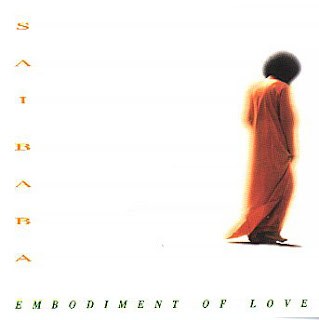 As previously stated, Alice Coltrane bore a passing resemblance to Cult leader and serial pervert Shri Sathya Sai Baba. He also shared another trait with the lovely Alice, in the fact that he made records of his incredibly creepy devotional music.
This is a common behaviour within the world of the cult leader. David Koresh, Chuck manson and Rev Jim Jones all have records out there, but I think our Sai made the creepiest ones.Just waiting for some Islamic State albums to hit the market,and I'll be happy.
Sai's sexual crimes have been well documented,and looking at the album cover you have to wonder what the fuck is he doing with his hands?.......he looks like he's wanking off to me!?
With a specific taste in deflowering young boys, "The Embodiment Of Love", the album's title, forced a little bit of my stomach contents back into my mouth.In the case of some of his younger followers,I dread to think what their stomach contents were after visting the holy one in his personal tent!?
It's all Alice Coltranes fault,but i feel a detour into the creepy land of Cult music coming on......and I don't mean 'The Cult', i mean religious and hippie Doomsday cults.....so expect some Amon Duul,Chuck Manson and The Church Universal and Triumphant with Rev Elizabeth Claire.If you thought the music you like was weird,this stuff is a special kind of fresh madness.

DOWNLOAD from the wandering fingers of Sai baba and his creepy cult member HERE!
Posted by Jonny Zchivago at 10:26

So on the album cover, is Sai baba taking a leak or stimulating his embodiment? No greater love than self love, eh? They have a word for that.... Ugh, time for another shower, perhaps in denatured alcohol this time. Musically, this has all the trappings you'd expect, but I refuse to allow it pollute AC's work, at least before she joined the ashram and got all sappy. Oh gawd, the approaching wave of enlightenment warriors sounds pretty malignant. After you've delved the depths of spiritual depravity I hope you'll finish up with something from The Church of The Sub-Genius, if you have anything. It's the only organized faith that I could possibly consider. "Om time-kill slack." For all you seekers of truth, http://www.subgenius.com Bring your cash for instant salvation. If instant salivation is your preference, there's always https://www.venganza.org Yum! Rzzzzt!

He's probably pissing on a young boy knowing him.Sai Baba needed to get slack,so,I think we can manage a Sub-Genius post or two....to help save a few poor guru's and swami's from themselves.

Sai Baba always makes me remember that story about the Italian backpacker. This guy stayed at Sai Baba's ashram and he got his hands on some of that "holy ash" that the holy one would mysteriously pluck out of the air (my theory? dandruff!!!)... Anyway, this Italian guy had glasses like a motherfucker, lenses thick enough to skate on, so he had that holy ash and 1 + 1 = 2 right? So he put all of that ash in both his eyes counting on 20/20 vision....

He spend like half a year in an Indian hospital, they did manage to save his eyes....

Maybe he should've asked the holy one to just piss in his eyes?

Speaking of "cult" music, have you heard Hansadutta? His albums are ... well ... really something.

I love your write-ups for your posts, very funny and cleverly written :-)

Funny not really and clever definitely not. Prejudiced would be a better and more fitting description. The music on this album is Sai Baba's traditional Indian kirtan/chants set to some excellent music by Western musicians giving it a hint of (gasp!) new age. And this is actually a genre that has gained popularity in recent times with Western artists like Krishna Das and Deva Premal being highly successful commercially. So the uploader's write-ups seem just to reflect ignorance of foreign culture (and a rather limited taste when it come to music). PS I feel obliged to state that I have no affiliation with Sai Baba. But it sure would show more intelligence if the uploader would look more critical into things rather than just duplicate mass media allegations that might very well be 'fake news'. Om shanti.

He-He....well you have to have a sense of humour in the first place to find something funny. Slagging off a religious cult leader is absolutely not 'cultural ignorance'. And abusing young boys is not something you can excuse because it might be Fake News. You're part of the problem.
Your sad superiority complex reveals your obvious lack of understanding of what this blog is about.If you don't like what i'm saying go away and play some of your mind expanding global music,so you can boast about how culturally aware you are(n't).
Om Shanti up yours.