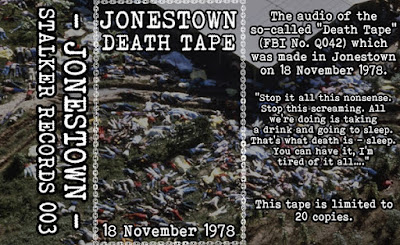 If a god told you to jump off a cliff would you do it?......er No, but i'll drink some Cyanide.Yeah, that'll show 'em!
Drugged up bible thumping commie, Reverend James W. Jones ,less than subtly suggested everyone kill themselves to 'step over from this world' to achieve peace. The silence at the end of part two of this casssette recording of the suicide event,seems to suggest that peace was indeed found, but only after all the screaming children had succumbed to the crude death potion the leaders had prepared for the, mostly, willing victims.
The most amusing aspect of all this,if you can find an amusing aspect,which I believe can be found in any situation;is that this alternative lifestyle,or alternative to life,was funded by welfare checks.So much so that they managed to leave around seven million dollars to the USSR in their collective wills;including half a million in cash in a suitcase that was supposed to be delivered to the Soviet Embassy in Georgetown.The suitcase courier was one of the lucky ones as he survived to tell the tale,incredibly after dumping the suitcase.....were these people dumb or what?
One assumes that the People's Church Choir were among the screaming victims as they convulsed before death in great pain.So we can see this tape as their farewell recording,or second album.
I've added a bonus track from one of the few survivors Laurie Kahalas,who 'channeled' this painfully weird poem in 1974,predicting,so she reckons, this future event within its cryptic structure. It also demonstrates why these people found it hard to fit in.

DOWNLOAD love as a weapon HERE!
Posted by Jonny Zchivago at 09:22

Sun Ra used to take a jaundiced view of hippies’ calls for peace. He saw ‘peace’ as in ‘rest in peace’, as in death, as in peace = death. That ambassador from Saturn might have been on to something. I think it’s fair to say he was running something of a cult himself, but I never heard any reports of molestations or appropriating follower’s property, or mass suicide. He basically admitted ‘yep, I’m running a jail. I’m segregating these hue-mans from humanity because I want them to do something they’ve never been able to do, to play ‘music’ they’ve never been able to play before.’

Thank you rev. b, Sun Ra has some buddha-like features, and I mean his peace, or death. Buddha got diarrhoea, and died about age 80. Sun Ra got misdiagnosed after a stroke. When he woke up he claimed to be Sun Ra, and the doctors said, well, we need to give the poor men some medicin for that too....Such is the death of the true great.
So we can make peace with our own.

Other spook projects:
The 9/11 conspiracy theory.
Donald Trump,
The 'we didn't go to the moon' mob.
Twitter.
I could go on.

You might want to check out Charles Mansons music, there is a bunch of it, hes become my favourite musician, very talented

Yeah Manson coming up after more fqther Yod stuff...held it back because i thought he was too obvious.

Fascinating- thanks for putting this up