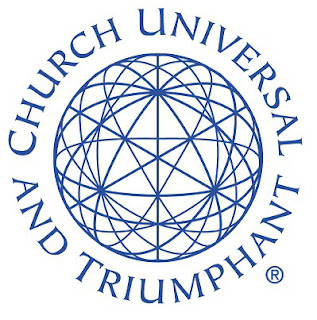 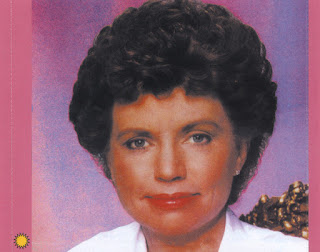 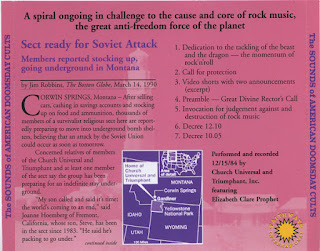 I mentioned that there were little or no Female cult leaders in the "Lord of Lords" post;well I forgot about Elizabeth Clare Prophet, and the Church Universal and Triumphant.
Expecting a Soviet attack on the Ides of March 1990, the complete loonie toons of the Church Universal and Triumphant sect,sold everything to buy food,guns and ammunition, to retreat into their nuclear bunker to survive and spread the word....mainly about how nasty Rock Music was. The fact that after a nuclear Holocaust its unlikely that any Rock bands would have survived;and even if they did I doubt they'd feel like churning out their hits with the radiation sickness, lack of food an'all.
But, just in case some of these demons survived, they kindly recorded these chants and other moments of deranged madness to educate the mutants who would inherite the wastelands of Earth not to fall into the same trap.
Educate it will, if there's any electricity to play this disc, so the Mutants wouldn't be stupid enough to raise any religious beliefs from the ashes of that former civilisation.

I do, however, 100% agree with Elizabeth Clare Prophet's invocation against Rock Music, so I may have joined them in their underground bunker to avoid that Soviet nuclear attack that never came in 1990. Oh how foolish would I have felt after emerging into police custody and charged with illegal possesion of an automatic weapon.or worse, illegal possession of a wart,dancing with a mailman,and marrying a horse.(I paraphrase of course,from dodgy perv comedy genius Woody Allen's classic "Take The Money and Run"...pretty much a perfect title for most religious sects methinks?)
Unfortunately, doomsday never came, and Cindy looper (sic) still lives to spread her evil, along with:
(there are some exceptions*/** who have now followed Elizabeth to burn in Hell,but a lot are still harming our childrens ears and s0-called minds....so let us pray:

As you may have noticed a lot of these agents of evil are dead, so it must have worked? Hey,wait a minute, since when did Culture Club not include Boy George?
The best one is Band Aid.....oh the pure undiluted evil of feeding starving African children!!!!???

DOWNLOAD to protect yourself against David Booowee,scooby dooby doo, and cindy looper HERE!
Posted by Jonny Zchivago at 08:48

Owww this is WONDERFUL, THANKS :)

A long time ago I posted this album on my blog:

I was a junkie but found THE LORD, that kind of record, it's fantastic (and I did a remix of it, just had to), private pressing from somewhere in the 60's... Funny thing, I got comments from a cousin from the guy telling me he was now living in Hawaii, divorced, one of his kids killed in a prison riot, and later he mailed me again telling me his ex-junkie uncle had died....

Can't get enough of these whacked out freaky insane kind of records, specially the Christian ones, hard to find 'em here in 90% Muslim Indonesia though....

Hmmm...says it's still uploading on my end when I try to get it. I want to hear it. I assume this is the track sampled by Negativland on the track "Michael Jackson" from Escape From Noise.

Awesome, thx!! I'm getting an "upload still in progress" thing all day tho...

I got the same error message about the file still uploading. Considering what I'm trying to download, perhaps Jesus is trying to shield me. Lord, it's a MIRACLE!

It should all be ok now, dunno what happened there....maybe it was a divine intervention by a rock'n'roll jesus?....most likely me shutting down the computer before it had loaded....i was in a rush ok?

They did a piece about that Testimony on the WFMU site years ago, thought you might like the extra info:

Wait a minute, I'm s'pozta fear insipid pop music rather than what's going on here? Sounds like livestock auctioneers from Hell. I don't even have to play it backwards to hear the whispers of Satan. In any case looks like the next one's got that base covered. 'Nwearsobnapth'

You forgot to mention Kenny Rogers, Dean Martin and Scooby Dooby Doo. I can personally testify that because of their subliminal influence, I worship Satan.

Utterly brilliant. Thanks for posting.

Snoop, I did manage to mention Scooby Dooby Doo in the download link ,but no excuse for missing out the Demons Rogers and Martin. May they burn in hell for what they did.

"Decree 12.10" is actually quite a wonderful piece of music. Too bad the idea behind it is batshite crazy!

Negativland did a wonderful version of this called 'michael jackson', on their '87 album 'escape from noise'

Correct,but so did the excellent Scouts Of Uzbekistan..... https://youtu.be/04bdhYr_S3A

wow, thanks for enlightening! your knowledge (and humor) make this site really worthwhile

Hometown pride! CUT kept things interesting in Montana during the 90's. Ironically, Ron Strykert of Men at Work actually joined the church and now teaches guitar lessons for $10 an hour (this is real).