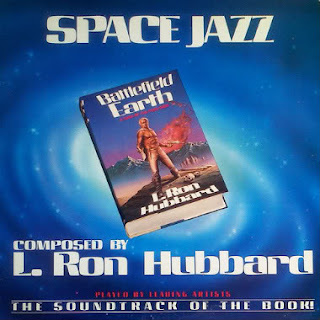 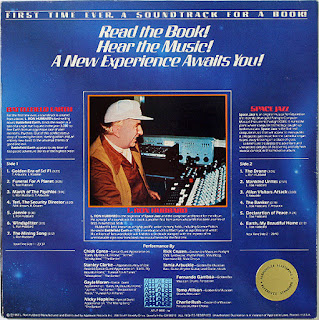 If The Residents got together with Andrew Lloyd Webber and made a musical it would sound exactly like this.
"Space Jazz" the soundtrack to the book,'Battlefield earth'.
The Fairlight makes a major appearance under the auspices of Nicky Hopkins,late of The Jeff Beck Group,and Jazzer legend Chick Corea.
Christ on a stick, Stanley Clarke was a Scientologist?He's on this too!?
It does indeed sound like a Residents after 1984 concept album,its that bad,but a lot weirder.I saw a Residents live show in 2000,and they could have just been miming to this crazy concept musical by L. Ron Hubbard for all I knew.I reckon Hubbard had heard 'The Mark of the Mole',and saw the Mole Show,then, like rich cult leaders do, he wanted to do it himself.There's Ron at the controls on the back cover.I can imagine L.Ron donning an Eyeball head, can't you?
There's a creepy alien voice that interjects and I'm sure it says the five letter word 'Trump' several times, and once it even utters the full name of the destroyer of the western world!?...Did L.Ron know something that we didn't?
Is Scientology gonna save us from the Trumpster and his legal aliens?
Er....nah!...Hopefully they will wipe each other out and leave us all alone.

As it modestly announces on the album sleeve:


"Space Jazz is an original musical form based on the recently developed Fairlight Computer Musical Instrument (Fairlight CMI). It marks the point where computer technology caught up with musicians. Space Jazz is the first real computer music that will appeal to mass public. It antiquates past music like the cathedral organ wiped away blowing on a blade of grass. Listeners are treated to the adventure and unexpected delights of discovering a totally new musical concept in this innovative album."......yeah right!?

Mark of the Mole/Intermission are two presonal alltime favorites + I love most of The Tunes of Two Cities as well - and now with Space Jazz finally the Mole-saga feels complete. It may not be up there with those mentioned favorites but its certainly way better than The Big Bubble. I thought you were exxagerating the whole Residents similarity-thing, but I've been a fan since my teens and its more or less IDENTICAL (-to their second best material but really much, much better than anything Residents post-1984).

I'm slowly becoming a bit of a Ron L. Hubbard fan. Surely the biggest prankster in the whole universe - ever. And that jazz-album underneath here was great fun as well.

Yeah, I reckon L.Ron was one of us,which makes all this shit i've been posting all the much better.
Was expecting a Residents Fan club punishment beating,especially for suggesting that they were crap post '84.....I actually like The Big Bubble, but for weirdness Space Jazz beats it hands down. The last thirty odd years of residents records are dire.I notice they got really awful around the time that Hubbard officially died....coincidence?...I think not.

I have a friend who it getting deep in some kind of cult since few years. His musical taste also drifted from listening to punk/experimental stuff: Skeleton Crew, DNA, etc to some soft cheesy sounds. Knowledge has a price I guess.

Sounds like you're decribing me......except the cult stuff....soft cheese has some far weirder stuff than experimental punk.


For me, it's like some Residents mixed with cartoons or even advertising.
We can feel Ron's delectation that turn to weird because a deep bad-taste in the respect of harmony where the Residents, much more radically, distort harmony to find some good-taste in weirdness, much more difficult !


Their eyeball was stolen after a show at the Hollywood Palace on December 26, 1985 and Ron died on January 24, 1986, one month later. So, he could have done it ! And he had to disapear, because there was remaining God in three eyeballs to punish him (?)

"In Stalking Ralph Howarth's best-known characters, the interdimensional assassins Ron & Russ Post, are hired by "the old man" (a former crooner with underworld connections) to unmask and kill The Residents."

Sweet Jesus, . I'm getting double-barreled with religio-cult squirrelitude these days. For those who can't get enough, Mr Weird and Wacky is also running a series of high inspirational materials, everything from Satan worshipers to Manson related songs of self praise to Spike Jones. To what ends these inspire is completely up to you. Feel the disease. Praise the president. Pass the cyanide.

Wasn't aware Spike Jones was a cult leader?... yeah also got some Manson stuff lined up, abit obvious but he must be included i suppose. I can slag him off i suppose? He was a bit of a twat after all? I just get images of Psychic TV all wearing manson tee shirts and think... for fucks sake he was just some racist scumbag who had a pregnant woman killed under some hippie bullshit philosophy. Now we got Trump doing vitually the same thing. Mansons corpse for president anyone?

Oh no, don't wave off the Manson stuff, an important part of a healthy breakfast. Looking forward to the PTV photo too. I never understood the attraction, but then again, I don't understand any of it. As for Spike, a bunch of loonies running around spewing nonsense, making one question their sanity? I think they fit. Manson's corps would only rot and stink up the oval office. so he'd be an improvement. The current POTUS merely starts off with those attributes.