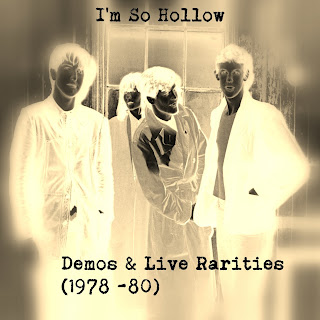 Joy Division is a hard act to follow,
So i'll stay in their era with 'I'm So Hollow.

The tenuous link connecting these two acts to segue from Joy Division to Sheffield's 'I'm So Hollow', is that they both played the Futurama Festival in Leeds; albeit 'I'm So Hollow did Futurama 2 and JD did the first one.
However, apart from the PiL and Joy Division recordings from Futurama 1, the only other I have is one track from I'm So Hollow's set at Futurama 2 in 1980.

Having already featured their lone album "Emotion/Sound/Motion" HERE!...and their Peel Session HERE!......naturally it's time to put all their errant rare Demo's and Live appearances together in one of Die or DIY?'s crypto-compilations.

Love this group, everything about them actually.Music aside(previously described by your scribe as 'Wobbly Sci-Fi Rock'), i admire the way they stopped as soon as they had achieved their ambitions,and never did anything ever again.In fact they split up before the album was released.If only a lot more bands did that?

DOWNLOAD to fill the vacuum HERE!
Posted by Jonny Zchivago at 14:27

ISH one of the bands that called it a day way too soon, whilst others churned out pointless dross

I've searched high and low for any ISH other than the original vinyl releases and Peel session but to no avail other than finding the Western Works part of this on the Sheffield Tape Archives website, so this is much appreciated

Nice, already have the vinyl & peel, so these are great to have/hear :)

Nice one Jonny! Love ISH. I just hope the demo tracks aren't taken from here: https://sheffieldtapearchive.bandcamp.com/album/im-so-hollow-western-works-sessions as that is a fundraiser for the late great Martin Lilleker which we got approval from Jane Antcliff to post. Cheers Simon

Here's a little puzzle - get from I'm So Hollow to Philip Johnson in 4 steps.

Rod Leigh went on to form Workforce with people from other Sheffield bands, one of those was Tim Owen; he and I had performed as Naked Pygmy Voles (classic stand on stage and make noise for half an hour band); I was part of the original DIY tape scene and amongst the people I collaborated with was - Philip Johnson.

Well I should have known really!?
What did you collaborate with Philip on?

Another vote for ISH from a fan who bought the original vinyl when it came out...timeless stuff!