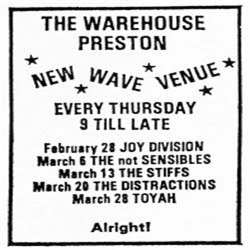 Equipment failure plagued this concert,with Curtis actually asking for requests after a long break during 'Heart and Soul'; while they fiddled about with the amps.Naturally the accepted request was for "Shadowplay".
There's also an amusing moment when a young lady with a northern accent makes an announcement informing those poor buggers from Burnley that their coach is leaving in five minutes! As if living in Burnley wasn't bad enough as it is?
Probably one of the most interesting JD live bootlegs,if only for the solitary time that the voice of the late Rob Gretton appears on a JD Recording.("Wossgooinon?...'ookeh,'ookeh!...Wass'appnin'?)
I bet Toyah never had these problems??

Get Depressed in Preston HERE!
Posted by Jonny Zchivago at 10:50

Does the bootleg of this (not the official release) have one of Joy Division having a go at someone for 'flashing the fucking lights'? If it's not this recording, do you know which one it is, or if it is even a Joy Division recording?

Not heard that, but read about it being said in retrospect by Sumner I think. So I don't think it was ever said,never mind recorded....myth enhancement or wishful thinking by a guilty band member i reckon.

It was definitely said because it's sampled in the track 'Just a fuckin idiot' by The Future Sound of London. I'm trying to trace the source of the sample. I was given the impression that it was from this bootleg, but I guess not if you don't know about it? Maybe it's another Joy Division one, or a New Order bootleg (though Curtis was obviously never in New Order, and apparently it was said in relation to Curtis's epilepsy, either by Sumner or Hook).