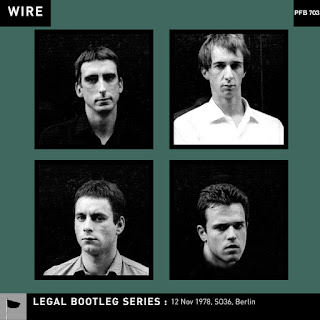 Wow! I never noticed before,looking at the cover photo's, that three of Wire are essentially the same person, plus Graham Lewis. Also what a miserable bunch of sods they were! Maybe they were trying to look like serious 'Artistes'? This would explain why they were popular in France, where the serious/miserable 'artiste' is king. I'm in fact registered as an 'Artiste' in France, and i'm definitely a miserable fucker too; but as i'm very English, i'm not at all serious.....and I assume this applies to our glum chums in Wire also?
This is strange, because Wire were/are very popular in the States for the opposite reasons; mainly because 'Pink Flag' rocked in a unique no nonsense style that motivated those Rock lovin' colonials to copy it and invent 'Hardcore Punk', which still resonates with the yoof to this very day!?...Wire, miserable sods that they aren't, quickly moved on from this innovation, to continue to innovate in a decidedly non rock direction. In fact they de-rocked themselves to such an extent eventually, that at least a couple of them became respected avant garde composers? Now that goes down very nicely in 'La France'!?
Here we have them, a year on from 'Pink Flag', playing a set of short,angular avant-pop tunes, sans "12XU", to an appreciative West Berlin crowd at one of the standard venues on the european Post-Punk circuit, the SO36 club.This is 'Punk'art, definitely NOT 'Punk Rock'!Leave that kind of stuff to the terminally repetitive UK Subs and their like.

DOWNLOAD through the berlin wall HERE!
Posted by Jonny Zchivago at 09:55

I looking forward to this because the other Illegal Legal Bootleg was such a fantastic recording of a great performance.

Wire and those myriad sub-projects of theirs kept my interest over the years while so many others artists lost me.

Loving your writing and musical tastes.

Hello as a little THANK YOU i'll contribute a recording of the show they did 2 nights before at the same club in Berlin.The first version i got was a cdr that (supposedly)was sourced from the net,but obviously in a horribly low bitrate that resulted in strange artifacts in the sound,especially in quiter passages and between the songs.But this version,offered in some blog together with the Bradford show you posted before,is much better,but not as good (at least soundwise) as this one distributed by Wire themselves on their pinkflag website.I don't know if they played another show on the 11th?
Anyway,here is the link to enjoy:
http://www89.zippyshare.com/v/RUS9r5Kt/file.html

From time to time i had to go to Berlin just to see if this hole of SO36 still exist. And yes, they're still breathing in and out the wall city air. Things change but not too much. The long black hallway from the entrance in to the temple is still the same than in '78. It was back then, when a bunch of "i don't pay 7 Deutschmark for Wire and i don't pay 2 Deutschmark for a beer"- WannabeAnarchists run into the ESSO, smashing everything before rubbing the cash and leaving a flyer.


The Nov12 show i bought some years ago from the pinkflag shop and here is (thanks 2 Bodhi Amol who made me search 2 days through my collection) the entire Nov10 show (21 tracks from the first gen. SB - no tracknames, no artwork):

Thank you Johnny - i love this blog. And the net. Time to pay back.