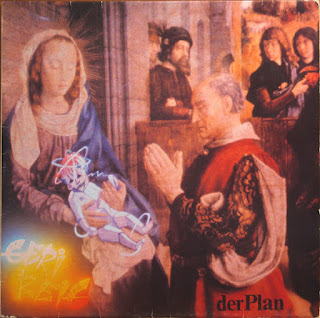 Der Plan went electronic for their debut album, with a mixture of Minimal Synth classics and lots of mucking about in the studio. There are some silly voices used, like their American equivalents and likely inspiration, The Residents. Alas they are hindered by that famous German drawback, a terrible sense of humour. Our Teutonic cousins should stick to what they're good at, efficient hard electronics, of which there are several examples on this rather good LP. Humour in music has always been a dangerous flirtation, that has rarely been pulled off. Just leave the larking about to someone else please.

DOWNLOAD this good plan despite the silly voices HERE!
Posted by Jonny Zchivago at 20:16

And I love this album as well as a number of others by Der Plan. I really do love this Hugely. Adrenalin boils the blood, and The world is bad are just for me two anthems, on one of there other albums you have a football anthem of enormous proportions A man A ball A shot A goal. You can mock them any day, I do not care, I love this.

Hey Johnny,since you are not a native speaking german and i suppose your understanding of german language and culture is somehow restricted you should keep from making such harsh verdicts concerning german humor.It's just different and for me these guys made some of the funniest songs and noises in Germany.Period!

Harsh comments are part of my style Bodhi.....you may not agree with them,and neither do I sometimes, but all helps to make this world less vanilla flavoured.A Kind of a Devil's Advocate situation.
I may not understand the language, but it happens both ways...german speakers regularly miss the ironic sub-text of my writings, as Richard (see above) may or may not have.....we love y'all for it.
Germany is not however internationally renowned as a barrel of laughs now is it?.....indeed you lot may have your 'in' jokes but no-one else finds them funny. Unfortunate, but a Fact. Revel in your traits of efficiency,work ethics,engineering and terrible dress sense,(all things the UK, for example, are shit at) and be Proud.

my last sentence (You can mock etc) should better be read One can mock..... but I thought it funnier to write you.

I just find Germans Funny as themselves.How they are confused by inefficiency, and how they think mullets and moustaches are stylish.
The French think that they are hilarious,and they love the worst examples of British humour, like Benny Hill and Mr Bean.
Dutch people, however ' are very funny.....obsessed with the price of everything....but funny with it.
Everyone in Britain think they are a comedian, and it gets very tiresome.Always busting a bloodvessel to say something witty or idiotic....but living in France i do miss that...everyone here is so serious,and have an inability to laugh at themselves.....unlike the Brits.
There you go, national stereotypes carved in stone for y'all.

I had GERI REIG back in the '80s, and I also had a German compilation that I can no longer recall. I don't know enough about it to find it on-line, either. Can't say if it was on Zick Zack or not, but I know it had "Fred vom Jupiter" by Die Doraus und Die Marinas. That title was compiled a lot so that's not much help. I think it also had Der Plan's "Ich bin Schizophren" on it. Does anybody know what this album might've been called?

Found it! And I misremembered about which Der Plan song it was: