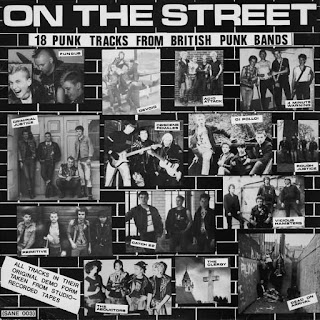 Sane Records followed up their 'Electropop' compilation of undiscovered uk synthbands, with, believe it or not, a 'Punk'compilation of those horrible groups that called themselve 'Punx' in 1984 UK.They also did a NWOBHM comp too....I don't think I could survive listening to that one as well as this!!??
By this time in the radioactive decay scale equivalent of generic music lifespan, 'Punk' was about 6 years past its Half-Life. What was tired and irritating by the end of 1978,had started to lose its intelligence, and what we were left with was the rotting seeds of 'Oi' and 'UK82', championed by Gary Bushell; like the Angelic Upstarts and Cockney Rejects. The real intelligence had departed for fresher fields by 1979, leaving just the yob element to flesh out the Daily Mirrors desciption of 'Punk' Rock exactly.
Legions of uniformed, agressive  young men on a quest to repress each other down to the lowest possible common denominator. This album could have been made by one single group, not 14!!!? Every track follows exactly the same formula, like a male only club. This had already happened in the USA, where this genre had become a macho male club on a quest to get faster and faster, just for the sake of 'Speed' because that's 'Punk' innit? Depressing stuff...for all the wrong reasons.
Having said that, i sort of enjoyed this, now thats it resides strictly in the vintage section of the rock'n'roll jumble sale. Some of the Guitar sounds are enviably dirty, but the lyrics are toe curlingly bad. Especially shit about Punx'n'Skinz, or Notts Punx!!? Best not to listen too closely, and just let the basic-ness tug at your funny bone.

Tracklisting:
A1 –Primitive - Why
A2 –Vicious Hamsters - Soul City Boys
A3 –Acid Attack - Suburbia's Dream
A4 –Oi Polloi - Punx 'n' Skinz
A5 –Devoid - Conned
A6 –The Abductors - Notts Punks
A7 –Catch 22 - Danger Zone
B1 –Criminal Justice - Machines And Systems
B2 –Criminal Justice - Middle East Mayhem
B3 –Fungus - Swimming Life
B4 –4 Minute Warning - I Don't Care
B5 –The Clergy - Blow This Town
B6 –Dead On Arrival - Molester
B7 –Dead On Arrival - Zyklon B
B8 –Obscene Females - Brain Surgeon
B9 –Obscene Females - Undersea
B10 –Obscene Females - Modern Art
B11 –Rough Justice - Victory To The Rebels

DOWNLOAD some roadkill HERE!
Posted by Jonny Zchivago at 08:29

Hi Jonny...the synthpop one is a good listen and most likely the NWOBHM comp will be much better than this punx effort, that punx stuff got tiresome straight away, the gigs being funnier than the actual soundz.

I far as i was concerned synth stuff was far more punk in its total rejection of Rock than these dumb punx ever could be.

I like this, but then I'm kinda dumb. How can you knock choruses like "Zyklon B, Zyklon B, Zyklon B for you and me"? And the Obscene Females would have easily fit onto a Weird Tapes comp...or maybe that's the marker fumes talking...

Mmmmm, marker fumes.
I do admit the Zyklon B chorus is a strange kind of unthinking poetry that describes modern britain more than a library of works by Englands greatest poets.......and, OK The obscene Females are could have been on 'Fuck Off' records.....but the rest remind me of the blokes my age who still wear jeans,boots and levver, with uk subs written in studs on the back.

if you don't like punk why waste your time on posting it and trolling it this part make me laugh this time in the radioactive decay scale equivalent of generic music lifespan, 'Punk' was about 6 years past its Half-Life.40 odd years on and punk is still around and there are lots of band's I think there are more bands now then there was back then yah there is a lot generic crap today but there are some really good one's and thanks to sites like band camp bands can record and release there music digitally this is a great era for music not just punk.I've said what wanted I'm not trying to attack you I just don't agree with your opinion on this comp and punk

Punk is still around is like saying Dixieland Jazz is still around. 40 odd years on, still nothing new added to the party since 1978. Of course there are more bands around now, but not one of them in the Neo Punk genre has anything new to add.....its just entertainment...nothing wrong with that, but don't expect me to label it the new Sex Pistols.
Asfor "trolling" it....i may not approve of some things, but they have a right to be put out there do they not? I also have the right to say somethings rubbish,but I do enjoy listening to rubbish;doen't mean i have to think its credible. As far as i'm concerned this kind of stuff buried 'Punk Rock' as a viable art form,with rigid uniform styles and rigid uniform sartorially. The punk ideal lived on in bands like Wire,PiL,Pop Group etc,not this.

Its all in the spirit of healthy debate innit?.....but i'm right.

nope wrong but you can think what you want

Well thanks for your permission to say that this generic rubbish is shit on my own blog.Very noble of you.

nothing generic about this classic punk record.I know won't agree and I don't care not going to waste anymore time hear have a nice live.

I think you wanna look up 'Generic' in your dictionary.

Ah Diddums, are you angry 'cus someone don't like your favourite mooozik?


Funny that, I thought I was the one who had a passion for 80's punk?

Very articulate....obviously i don't talk as much shit as you...just thought you should know.