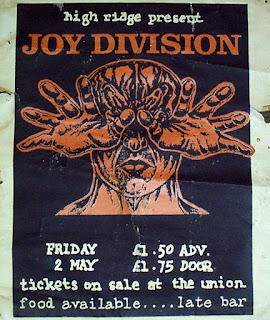 A notable performance,that brings us to the end of this seemingly endless series of Joy Division Bootlegs, for two reasons.
One, it was the only time Joy Division performed "Ceremony",and, two, this was the bands final performance.
For those of you who live on some exo-planet somewhere, Ian Curtis, vocalist and lyricist of Joy Division(?),committed suicide a little over two weeks after this concert,after enduring a turbulant personal life and suffering from worsening epilepsy.
This sad fact adds some poignancy to this performance(despite Bernard's constant bum-notes!), which sounds like a well recorded funeral march to these ears in retrospect.The lyrics read as some kind of preemptive obituary....."Ceremony", "A Means To An End" "Isolation" are all very ominous titles, but maybe the lyrics to "New Dawn Fades" seem to accurately describe his desperate situation and feelings:

"A change of speed, a change of style
A change of scene, with no regrets
A chance to watch, admire the distance
Still occupied, though you forget
Different colours, different shades
Over each mistakes were made
I took the blame
Directionless so plain to see
A loaded gun won't set you free
So you say

We'll share a drink and step outside
An angry voice and one who cried
We'll give you everything and more
The strain's too much, can't take much more
Oh, I've walked on water, run through fire
Can't seem to feel it anymore

He does seem to be going through the motions during this performance,as do the rest of the band.
He was actually helped offstage again during "Decades", but returned for a rousing version of "Digital",which as a fitting (no pun intended) monument for his last word sung in public,included the word,'Out!';which he undoubtedly wanted to be.Then his last words were ominously "Thank you, Goodnight".

As an Epitaph to the life of Joy Division, there are better concerts; but as an elegy to the troubled existence of Ian Curtis, this show exposes his vulnerability perfectly.....it's a pity nobody noticed or were willing to do anything about it.It was an era when men's mental health was frequently laughed off, with a 'Pull yourself together man' attitude. The only answer his management and 'mates' could come up with was an 'American Tour' that their singer never made.Then we got, the not very good, New Order?!

[To those who care, its a quality soundboard recording, with two very fuzzy soundcheck recordings to kick it off with.]

DOWNLOAD the premature burial of joy division HERE!
Posted by Jonny Zchivago at 10:29

Thank You so much for these Joy Division posts.
Greatly appreciated...
I was actually at three of them, fond memories.
Thanks again.

Man, thank you for all of these recordings! And all your great commentary concerning them. Very much appreciated by a Yank who found out about them as a highschool kid in 1980, just a moment too late.

Hearty thanks Jonny for the JD collection. This spate of recordings are a reminder that for all their mythic status, they were still a just a band playing gigs wherever they could. While "Love Will Tear Us Apart" is their best known song for many, it's "She's Lost Control" that remains their defining moment for me. The creeping terror that oozes from that tune is indelible.

Hi Jeff, you were obviously a very enlightened Yank.Outside of New York I don't think anywhere else in the states were aware of them.

Indeed Ian, and i've stated, I prefer Live JD to the official records.For me they were far more intense live.

Thank you. this is the best version of ceremony.

Thank you. This is my first time hearing this performance. Bittersweet.