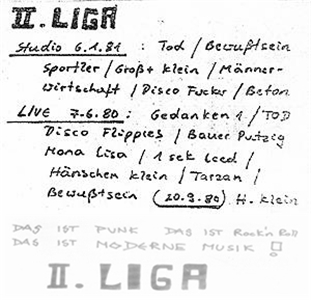 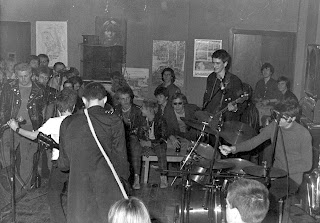 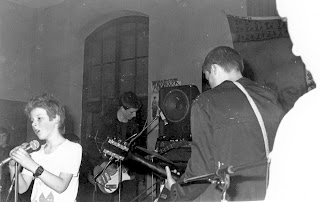 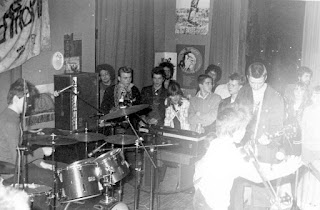 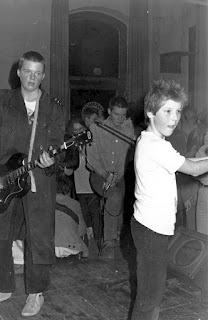 Not only did West Germany have their own Residents (Der Plan), they also had their own version of The Prats too. Modestly called Die 2. Liga (The Second Division), they formed a 'Punk' group(average age 12)played a few live gigs,did a session for Rondo Records, and released a very limited edition tape( a limited edition of 5 I am told!)

This stuff was (re-)released on limited edition vinyl a couple of years ago, but thanks to Die or DIY's German chum, Michael Festerling, we now have far more tracks than on those impossible to find discs.
Punk Rock had a fine tradition of including everyone excluded from such previously exclusive fashionable cliques, like the reprehensible 'Bromley Contingent' in the UK.
The likes of Eater, The Prats, and The Fatal Microbes would have been excluded, along with the women, from many other youth cults.
We can now add Die 2. Liga to this roll of honour, as champions of German 'Outsider Punk'.
Basically they sound like The Prats, but with better equipment, and they sing in German.


In the words of Dirk Moll, the drummer,

"We were founded in 1980 and had our first appearance at the Unterstufenfest (lower school party ?!?) at our high school. All members of EA80 were there ,too, through which we were also motivated to form a band and always appeared as a supporting band with them.
An exception was the gig with ÖSTRO 430 and ZK (see photos).

In 1983 we disbanded due to lack of perspective and because we were too old."

(NB...standing,enviously, in the middle of the photo left to the girl with the white jacket Campino of ZK .He is now the singer of the what most people seem to consider as 'punk rock superstars' „Die Toten Hosen“)

DOWNLOAD from the premier league of kiddie punk HERE!
Posted by Jonny Zchivago at 20:46

The German Prats? I am very excited to hear this.

And they have a song called 'Disco Fucker'. Splendid work.