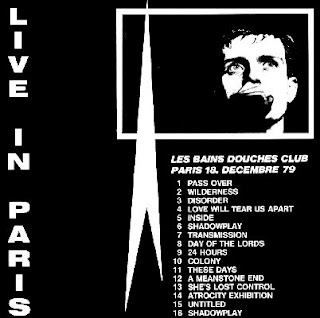 Again we have to thank France for saving anglo-american music from themselves.This concert was the subject of a radio broadcast on the Bernard Lenoir Show on French radio, so there exists a broadcast quality recording , which was partially released on CD at the turn of the century.
This official version doesn't seem to include the whole of the performance however, but its by far the best quality recording of Joy Division in action.
So, to fill in the gaps this is the full set as recorded by an audience member on the night.It reveals that mistakes were edited out ,whole tunes dropped, and what sounds like modern effects added, with generous amounts of compression. It sounds a lot more punchy than the bootleg,or anything that had been released before under the name of Joy Division. Probably the most played release by JD in my collection.Probably the high water mark for Joy Division, before Ian's illness and personal problems took over and destroyed him. 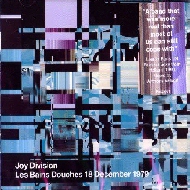 Hello,here is the complete concert as a combination of the different broadcasts plus the missing tracks from audience (in FLAC):
http://toanend.blogspot.de/2014/06/les-bains-douches.html
Enjoy...