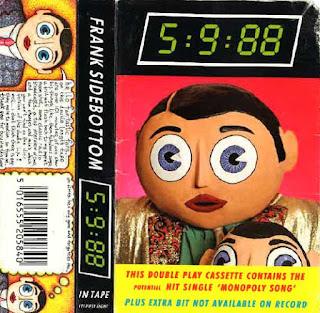 If there's such a thing as someone who isn't a Frank Sidebottom fan out there!?????....incomprehensible I know.....then you've probably had enough of this adenoidal and obviously mentally ill  but cuddly northern English version of John Wayne Gacy. One could compare him to The Residents,but funny. This comparison encapsulates the difference between American and British humour.One is as sophisticated and tiresomely witty,dedicated to either winners or winners on their way up, and the other isn't.
The "isn't" bit refers to sad parent's house dwelling losers who live in a fantasy world like Frank Sidebottom. The nearest american equivalent i can think of would be Rupert Pupkin in Scorsese's "King Of Comedy......notice how something like Frank Sidebottom would only appear in american culture if it was realised by a top director who exists within the american cultural elite; whereas in the Uk,basically everyone's like that.
Actuleh, there's something about Frank that reminds your author of himself...in the third person. I too, have a little Jonny that i can be really nasty to,and an inflated vision of myself that qualify's one to remind the un-cooperative of exactly who I FUCKING AM!
So, here's more Frank, in fact two hours more of Frank, at his very best/worst. Especially Frank's missed vocation as a Game show host in "The Squid Is Correct",introducing Dave the evil head-hunting pygmy who only communicates by Morse Code.
Game shows like this actuleh existed on early eighties British television, primarily in the form of the Darts Quiz called "Bullseye",among others. This was a quiz for the underclass,and menial workers,whose quiz categories included "Spelling", "Books" "Places" and,a subject that Americans are very comfortable with...."Bible"!...why "Bible" wasn't included in the "Books" category i have no idea!?
David Lynch spends millions of investors dollars to create something only half as surreal as "Bullseye";whereas ITV spent approximately seven pound fifty-nine to achieve the same if not exceed,the level of Surrealist Television,that Luis Bunuel could have only dreamed of.
The winners would invariably be going home to whatever shithole they were imprisoned in, accompanied by either a 'Speedboat' or a caravan as 'Top' prize.
Which is from whence your blog author himself escaped from,without the help of a speedboat i may add.....the worst part being that your fellow inmates wouldn't want you to survive in the outside world,if they couldn't fuck it up for you before you left,and became moist at the thought of the gloating they could administer if such an escapee should return!?
Driving around those concrete concentration camps the post-war British Government called Council estates,one could identify the ones who had been on Bullseye by the absurd sight of a Speedboat parked in their front garden,next to a pile of old mattresses.....yes they had gardens.Even the Nazi's had a garden included in their charming extermination camps, so there was nothing new there; although i don't think the SS would allow the top prize to be a speedboat, more likely the caravan option, modified to be a mobile gas chamber which was once so very popular during the Party's euthanasia program back in the 1930's.Fun Times huh!? However when this show was cancelled the compare/camp Kommandant would pay the ulimate price of being hung by Albert Pierrepoint from a makeshift gallows in the camp grounds.
The Russians, however,tend to subjugate their under class by conscripting them and sending them to Ukraine to get shot....and the latest news is that vile Putin Puppet Medvedev has suggested the return of capital punishment for anyone not up for a return to the  fun times of the Soviet Union.
This could have all been avoided if Russia had a Cyrillic version of Bullseye.The British may be a bunch of fucked up morons,but sometimes we get some good ideas....just that Bullseye wasn't one of them.
If Frank Sidebottom was the new leader of Russia,or even Great Britain, we'd now all be dead...so count your blessings.
Tracklist:

A1 The Robins Aren't Bobbins
A2 Little Frank Arrives
A3 Me Great Big Zoo Scrapbook
A4 Best Of The Answering Machine (Part 1)
A5 Radio Timperley Intro
A6 The Tomb Of Maurice Karmen
A7 Radio Timperley Outro
A8 New Material
A9 Mr Custard You're A Fool
A10 What's Happens Now?
A11 Frank's World Intro
A12 The Squid Is Correct
A13 Frank's World Outro
A14 Little Frank Leaves
A15 It Was Nearly 20 Years Ago Today
A16 I Said, 'Hey You, Street Artist'
A17 Mrs Merton's Baby
A18 Fantastic Sea Shanty
A19 Star Interview
A20 Patrick Moore
A21 Little Frank Interrupts
A22 Fantastic Flashback Starts
A23 Cape Timperley To Lunar Dustbin
A24 First Puppet On The Moon
A25 Ultimatum To Return
A26 Of Puppets And Pace And Money
A27 2nd Ultimatum To Return
B1 Airplay
B2 Big Frank Blasts Off
B3 TVR-17 Station Output
B4 Little Frank Shows Off
B5 S.O.S.
B6 Big Frank Returns
B7 Fantastic Flashback Ends
B8 Monopoly (The Game)
B9 Mike The Manager
B10 Monopoly (The Song)
B11 Lucky World Cup Willy Coin
B12 Best Of The Answering Machine (Part Two)
B13 What This In The Diary?
B14 Frank's World Intro
B15 Roulette
B16 Frank's World Outro
B17 Football And Weather
B18 Star Interview
B19 Ian McCaskill
B20 Mr E. Lake
B21 Timperley Travelogue
B22 Extra Bit
B23 I Said, 'Hey You, Riot Policeman'
B24 Down At The Moss Lane Football Ground
B25 Five And A Half All Time Great Footballing Chants
B26 Sue Of The Sioux
B27 Roger And Sarah
B28 I've Got Something To Shout About
B29 Mrs Merton
B30 Nicolas Parsons
B31 Fantastic Barber's Shop Song
B32 Not So Fantastic Argument
B33 Electricity

Wow, thanks again Jonny. I thought I had this, but no, the one I have (on vinyl) is the similarly titled 13:9:88. It has a warning on the front:
"Warning: Any home-taping of this record will result in a citizen's arrest"

They're trying to make it like America here, though. They made a Frank Sidebottom film, after Chris Sievey died, and A- lister, as in first-class arsehole, Mike Fassbender joined in the 'fun' by playing 'Frank'. He doesn't remove the paper mache head for the duration of the film apparently (heven't seen it), which I'll bet some deluded soul has described as 'brave' and lacking in ego. Probably in The Guardian. Or maybe that's just my poisonous misanthropy boiling over. One thing I do love deeply is the magnificent Bullseye, one of the greatest TV shows ever, thankfully in constant rotation on Challenge, so there is at least one reason for owning a TV set. The 'Bible' category didn't last beyond the second series, or maybe the first, which is virtually prehistoric in it's low budget primitivism. A joy. With each series it becomes increasingly slick, but still retains a sparse feel. It shows up the excess of today's TV, focussing on the essentials - man, woman and dartboard. A great curative to the 'aspirational' fondue party vibe of sick-makers like Pointless! But there again we do have the godlike majesty of The Chase, so give thanks. Britain always took to and took in stride the likes of Lynch and co because the weirdness is like the air here, they weren't so successful in getting everybody to pretend to be productive corporate citizens as they are now ... forgive my verbiage if you can, many thanks and well done on your excape

Hi William K, i referred to that bloody shite "Frank" movie in Franks Fantastic Tales...but your verbiage is spot on,Being Frank is the sidebottom film that should be observed and served raw.
Cheers
more to come

In retrospect Chris Sievey really ought to be viewed as one of Rabid's stable of one-off personalties, along with Jilted John, John Cooper Clarke and, er, Ed Banger - all of whom were produced by Martin "Hannett" Zero. Fact!

No reason to disagree with that anon.

(Me again) Come to think of it - although the young Steven Morrissey spent his time hanging out at the New Hormones office rather than the Rabid one (although he was very briefly a Nosebleed!), maybe "Morrissey" should also be viewed as another one of those aformentioned one-off self-invented Manchester personalities, albeit one that got out of hand... Even Steven Morrissey clearly grew sick of being "Morrissey" eventually.