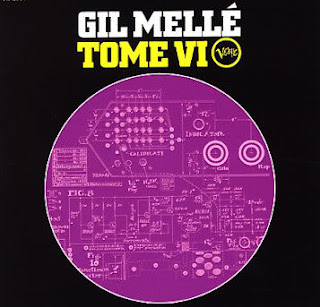 Yes, it's 'Jazz'.....impressed?...nah,me niether.
But it's more than that, It's Jazz with an Early Electronics flavor......Now you're 'Hip',all the way from the original hipster to the modern hipster all in one package with free beard grooming kit.
Gil made the "Andromeda Strain" Soundtrack, which featured rather more Electronics as played by a bunch of chimps at Twycross Zoo.The same Zoo which had a chimp who could gob a ball of rancid saliva at a chump,this chump,doing monkey impressions over 50 metres away,effortlessy. A bit like a Jazz Trumpeter.
It has been mentioned on the wonderful interweb that yours truly has no idea how difficult it is to make free-form electronic soundscapes,especially in the early 70's. Well, I have a lot of idea how difficult it is to make electronic sounscapes with fuck all money,in fact I'd say it would be nigh-on impossible.An accusation made by someone who makes electronic soundscapes about someone who doesn't because everyone does nowadays is rather irrelevant anyhow. Yes, a bunch of chimps with a VCS3 could make a wonderful noise,but, like me, they have bugger-all money to buy one,even the budget Behringer version.
Here we find our Gil making glorious Free Jazz improv with ...yes,Electronics, to show how hard it is to make improvised Jazz music...and the key word here is 'Music'. Basically any discerning pond dweller can make a complete racket,but at the expense of the music.....that's the hard bit. Make all the soundscapes and funny noises you want, but makin' melodies ain't easy, buying a synthesizer and switching it on, is.
This album is great, and as a bonus you can impress everyone  as to how intellectual you are at the same time.Jazz is, Jazz was,chacachacaaaaah!

I imagine I would be expected to like this one, and I do enjoy it to some extent, but there's always been something fuzzy and directionless about this album. I still pull it out every now and then, thinking 'aw, I was probably just stoned or something', but it continues to be like trying to grab smoke. Gil did another, more DIYish album in the 70s called Waterbirds. that made more of an impression, on me anyway. By chance, is that up next? If not, would you or anyone reading this like a copy?

Morton Subotnick tells a story about a gig he got making soundtrack music for a public television show with futuristic leanings. He accepted the commission before he had any of the gear, except for a reel to reel tape recorder and microphone. So what he did was get an old auto gas tank, fill it halfway with water, and hang it from the rafters of the barn he was using for studio space. By striking the tank and manipulating the chains he was able to get the water to slosh around inside and continuously alter the vibratory modes, so he got these cool warped enharmonic tones on tape. He spliced together the best bits and sent it in, and they loved it and sent him the check. He bought his first oscillators with that check, and for the next episode, he started making the music he'd always intended to make.

They hated it, and said they wanted "real electronic music," like the previous tape.

this is the record I won at a Fair in 1980. I didn't know what to think of it but recognised the verve label from my velvets album... so gladly accepted it. Thought it was horrible at the time... older ears have greater admiration these days! Nice!
Andy

Hi Rev.b (first comment here),
I'd very much like a vinyl copy of Gil Melle's Waterbirds if you are offering, that is. It's a great album and I've been searching for it for a long time now. Anyway, this was worth a try.
Aljaž from Slovenia

Hello izzy, Is a year and a half long enough a wait? Something prompted me to revisit this post and I only now saw you request. I'll reference this in Johny's next post since I doubt you'll see this otherwise. Just goes to show, even after you give up, don't give up. Hope it was worth the wait.