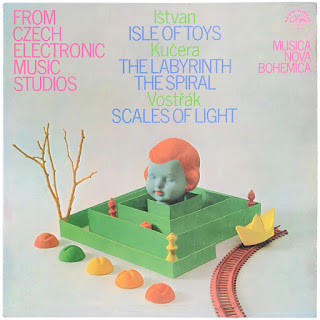 If ever there was a soundtrack to life in a police state then this is it. On State Label Supraphon, with cover art from some twisted nightmarish detention centre inmate after a long spell of sleep deprivation, this musique concréte escapade emits all the joylessness of a lifetime spent under curfew.
Largely involving tape manipulation,and thankfully lacking access to the Soviet Union's state-owned EMS synthi 100 in Moscow, the edited and varispeeded recorded sounds have all the characteristics of a fully furnished subterranean dungeon in Prague.
Each new track is like an interrogator saying "Let's Go back to the Beginning",as it seems we've been here before but still aren't any wiser as to what you did last summer,especially as every day feels like winter.Music that'll make you admit to anything to avoid the 'Bath of Shit' part of the afternoon.Nothing's worth that illegally imported pair of jeans you purchased from that under-cover policeman last July.
Most of Czechoslavakia's prog rock fraternity were locked up in the same interrogation centre that this stuff evokes,but you could get away with it if you achieved the status of of 'Official Musician'. Without the nod from the State you weren't allowed to play music to a paying audience,if at all.Anything 'western' or subversive was an arrestable offence; as the Zappa-esque Plastic People Of The Universe found out.
The composers of these creepy early electronic cattle prod-a-gogo instruments of aural torture,were,of course, possessors of pieces of paper that allowed them the distinction of being official 'State Composers', so they were safe in their state provided accomodation.....undoubtedly bugged,but its a rent controlled roof over one's head, where subversive thoughts could be encrypted into indecipherable weird noises and passed off as 'Avant-Garde'.

DOWNLOAD the sudetenland of electronics HERE!
Posted by Jonny Zchivago at 08:41

In My Wardrobe said...

Well, I'm not downloading this one, but for three very good reasons :

2. I'm not really that into this strand of things in general - but even if I was....

3. ...there is no possible way that the contents can be any better than that album cover.

The cover is one for the ages.

I wonder if you are working on some sort of reverse psychology in your descriptions, bc the more you hate on some album, the more I want to hear it.

OTOH, I really don't need all those Throbbing Gristle bootlegs!

Ted!...are you suggesting that my description suggests that i don't like this record?....I thought is is quite clearly a 'you must download this' review? The cover is unimpeachable,like Donald T,who shares some of the pastel shades used by the unanmed genius that made that thing on the cover.