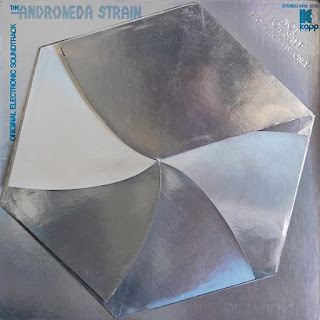 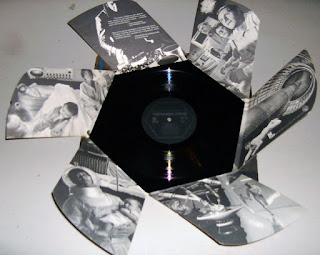 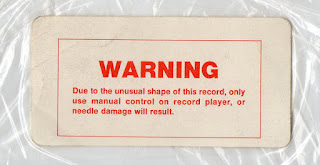 One the very few records whose sleeve cost 200% of the gross profit,and the hexagonal ,unique in itself,record inside destroyed your turntable if you forgot to switch it to manual......how cool's that?
Jazzer and electronics dabbler Gil Mellé,was commisioned to make a weird electronic soundtrack for one of the most painstakingly boring science fiction movies this side of Tarkovsky's 'Solaris',which also had a electronic soundtrack too ,did it not, by Eduard Artimiev?
A tiresome science-fiction techno-thriller documenting the efforts of a team of scientists investigating the mysterious outbreak of a deadly extraterrestrial microorganism/Virus.Hmmm,where have I heard that before?These ambient style horror electronics are really the work of the Synth rather than the 'artist'. Give a chimp a go on a EMS synth and something similar will emerge....you don't even need an infinite number of Chimps either....maybe one or two,or just one aging Jazzer looking to move into soundtrack work.
This was the first all-electronic soundtracks ever released,but not the first to be commisioned.No-one thought anyone would want to listen to this stuff in their homes until the seventies.It's sonically challenging, ominous and discordant. Like a haunting electro-acid patchwork of analog synthesizer experiments...but,experiments that could be done by the infinite chimp that resides in all of us.For that reason alone this should be praised;and then there's the packaging,and the stylus mashing record shape.Which makes this all quite perfect.It's a perfect soundtrack for a film about containing an outbreak of an extra-terestrial virus,and perversly turns out to be the perfect soundtrack for these times...there's a virus outbreak apparently that's slaying 0.004% of the human population....run for your lives,but wear a mask, disinfect your hands,and listen to the soundtrack of "The Andromeda Strain" while you're running,not dying.

DOWNLOAD the soundtrack to the constipation problem in our nearest neighbouring galaxy HERE!

This time -a very rare moment- you are totally wrong, my friend. This electronic OST is probably the best, or at least one of the very very best, in the whole history of abstract-allienesque-electronic experimentation! Brilliant and perfect - no BEBE bubbles, no HENRY monkey business...
To cut the long strory short, if you know Conny Schnitzler, Derbyshire, Cluster, Throbbing Gristle, Subotnick or NWW
and YOU DON'T KNOW "ANDROMEDA STRAIN"
you know nothing...

@ Christos...did you even read my blurb? I said it was perfect etc...only it could have been made by chimps,with a little editing maybe.a reference to how easy it is to make music like this,especially now,it wasn't easy in the 70's because the equipment was so expensive
this was not a slag off my friend..

Gil Melle also did the theme music for Rod Serling's Night Gallery - no "electronics" to excite the old-gear fetishists, but unusual in that it's the same bit repeated over and over half a dozen times.

@philip S....i think the problem now is getting the Chimps...they're endangered and as a result, rather expensive.
Would love to see a Vintage Synth Chimps Tea-Party...and record it.....or maybe i've already seen it...Depeche Mode I think it was called?

Whew! For a second I thought it was going to be spherical with bunch of little spikes on it.

A vintage synth chimp tea-party... only in my dreams I’ve always thought. This thread has made me believe it's now inevitable. I only need to be prepared. Can one ever be prepared for that sort of thing? Does it matter? Lovely blog this.

Unfortunately since Twycross Zoo has fallen into financial difficulties, the tea party chimps are in danger of being put down. Where will we get our chimps then?

Regarding Depeche Mode, I always had my suspicions about Andy Fletcher. Maybe I need to go up to Twycross and save one of the tea party chimps to front my next musical project, seeing as I can't be arsed to do it myself.

Ah! Twycross Zoo, that's where I had to avoid the slaiva of a chimp who gobbed at me from at least 50 metres away with incredible accuracy,for making monkey gestures in his direction....i had to side-step it with haste.Respect.
He's in the band if he's for sale in their Co-Vid clear out?
We just need four to make a human league tribute band...the Proto-Human League. Chimps aren't interested in money so we'd clean up....and i don't mean clean up the chimp shit after the gig either.....could do a Pet Shop Chimps band called 'Homo-Erectus' too....the world is ours!

For the record, Sleepytime Gorilla Museum were actually chimps.

Loughborough College of Art & Design took us on a trip to Twycross Zoo once. The highlight of the Orangutans' day seemed to be when we arranged our pencils in groups of complimentary colours.

I haven't been back since.

But maybe I'll bag one of those to do the sleeve art.

Anyway i'm going to stand my chimps at four plinths covered with a selection of twigs, marbles, coloured pencils, toy cars, etc. with a 3-D projection of floating bananas in the background...

Sorry Jim, I accidently deleted your last message,where you signified your shame of coming from Leicester......everyone comes from Leicester these days,that is, until the re-lockdown.
I remember buying some records from a bloke from outer town,who had a stall in the market one day a week. I said i'll have these...La Dusseldorf's third album, Mr Spocks "Music From Outer Space", and Archie Shepps "Yasmina ,A Black Woman".....the bloke said, "You know what you lot from Leicester are?"
I said, yes, but go ahead...
"Eclectic"......I was thinking scumbags,but, I think he may be right....yeah I like it!
Anyway another bloke from leicester, who ran that Ultima Thule Shop by the train station, is finding all this amusing apparently.....mainly laughing at the fact that I dunno what I'm talking about......sad thing is he's right....this is being written by a Chimp I picked up going cheap....just need that EMS Synthi 100 now,and we'll be quids in.....Andromeda Strain 2, knocked out in on all night session.
Yeah, never watch Solaris at night unless you have sleep problems.

I astounded one dealer at a Leicester VIP record fair by purchasing "A Big Dog.n" by Jody & The Creams from him. Quite taken aback that anyone would know about / understand / be interested in etc etc. If I still had that on vinyl I would be filing that next to my Showaddywaddy LPs in the spirit of eclecticism.

I'm afraid the Chimp idea is off....that chimp has ran off to sea with my wife!
Nows the time for some Showaddywaddy I think!?