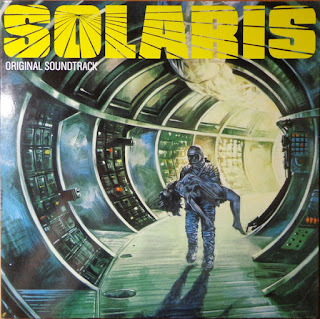 Dunno if its because I'm pissed (drunk, not angry, you americans!) but this is fantastic!
Everytime I've seen 'Solaris',the Soviet funded answer to '2001', I've been pissed and woke up thinking it was Fantastic.
Then I saw it sober, and fell asleep,woke up thinking that it was an incredibly boring crock of shite!
It's a film that you need to be in the correct time and place, and state of mind to enjoy.Unless you are a psuedo intellectual who would never admit to being bored by Tarkovsky.
Right now,i'm Loving this dark ambient foray into the darker energy of the ultimate isolation on the shores of a lifeless infinity.
No-one captures emptiness better than Artemiev.....unless you're sober that is.
A contemporary of the equally demanding "Andromeda Strain",which I have seen very sober in the daytime, and thought it was a masterpiece....then saw it drunk with some mates and we all thought it was a boring crock of shite,then switched over to watch 'Godzilla vrs Mechagodzilla', which is a work of unappreciated genius!
What is good and what is shite is a complicated science indeed;but right now i'm saying Solaris is one of the greatest films ever made, as is 'Godzilla vrs Mechagodzilla'.....as for 'the Andromeda Strain',i'll see next time i'm off my tits on strong continental lager......i may have already labelled it 'dull' in the previous post featuring the hexagonal soundtrack album that mashes up your stylus.
However both soundtracks are unsttling dark ambient excursions into the black heart of the human condition.......can't really say that about the "Mecha-godzilla" soundtrack,but i will post it for a classic 'contrast and Compare' moment.

Beam me down scottski HERE!
Posted by Jonny Zchivago at 00:01

Whenever I watch the scene with with Bach's Chorale Prelude in F Minor (BWV 639--not the other one; also, not played by Artemiev. I used to know who played it, but I forgot) it _seems_ to be played very slowly--like, almost half-speed. But when I play along to it, or play another recording alongside, it's well within standard tempo. SO what's going on here? When I see it, I can't get it out of my head that it's really slow. Explain.

I suppose is the slow motion of the weightless coreography that creates the effect of slowing the perception of the mooosiq,.....apart from that,how dare you bring such technical observations to this blog!

You guys seem to be willing to listen to strange music.
I make experimental-folk music and I was wondering if you’d like to give it a listen.
https://thommills.bandcamp.com/album/chicken-egg

Apologies for putting this in the comments, I couldn't find any contact information.

As a 'yolk only ' egg eater, I must chastise you for using this space for vulgar self-promotion.
As a dark folk fan I can appreciate what you're trying to do,but its too jokey for me singing wise and the wordage, but recording quality is good...ie...shit...the instrumentation has that essential 'Bagpuss' vibe, so you just got a third star out of Five......drop the vocals,get darker,and more no-fi is my suggestion.....basically just do what you want,no fuckers gonna buy it or hear it apart from weirdo's like the readership of this blog.
Maybe i'm not appreciating the Egg again?
When I run out of records to erite about something else to i'll likely move to Bandcamp bands, when I will duly give you a mention.

Thanks Thomas,keep on going and never stop repeating yourself....it works.

"Godzilla Vs Mechagodzilla" is by far goofier and upbeat, and features a woman singing a song to a godlike monster to make it wake up. If only I could find a DVD release that subtitles that song.

Japanese Godzilla movies, as opposed to american Godzilla movies..which are total fucking shite....are some of the most insxplicably wierd creations ever to stalk the sewers of taste....I''m preparing the Mechagodzilla soundtrack,but its hard work...so many tracks i'm losing my will to live....it was the same with The Shining 25th anniversary edition.....just done that....i need a rest..Godzilla Help me!

The last one was less shite though, and actually seemed to make an effort to be more like the proper films, including the music in which Bear McReary punctuated his interminable bombast with original themes.

I need to take in a movie now, to take my mind off how I've never felt so ashamed to be from Leicester in my life. If I go for Solaris I will probably be snoring long before the beer interval cuts the film off halfway through, which is probably why I will be watching Godzilla: Tokyo S.O.S. instead.

I really have those Godzilla songs going round in my head now, like the one about pollution being the real monster (Godzilla's Revenge / All Monsters Attack, Japanese language version). There were some important warnings within those movies, and it seems humanity has been too stupid to heed those warnings as we are now seriously up the creek. As Half Man Half Biscuit said, "never mind the paddle, we haven't even got a canoe".

Indeed, I have often said this about so-called trash films.
I sadly know all the words to 'Plan Nine From Outer Space',and people say that is the worst movie ever made...which is patently wrong. Shit like 'Thor' and 'fast and Furious 29' are in the 'worst' category.
Plan 9 was a standard bearer for nuclear disarmament when such thoughts could have you branded a 'communist' (I know that feeling!), and banged up in the slammer.Plan 9, alone as far as I can see in 1959, argued against self-annihilation,well before Dr Fucking Strangelove....and its funnier than Dr Strangelove too!....a lot of Godzilla movies have the same theme.Godzilla made me a peace lover...FACT!

"All You Of Earth Are Idiots!" and "Your Stupid Minds! Stupid! Stupid!" will be my mantra from this day forth. I thank you.

Ahhhh,one of the greatest encapsulations of the human condition ever committed to film.
I also like this plan nine quote that finally puts feminism into its correct light:
"THATS ENOUGH"....(Eros pushes spacewoman Jenna to the back of the saucer)....It is a womans place to further the race,NOT to fight Man's Battles!"......
Aliens are so much more advanced than we think we are.
I suspect Donald Trump may well be an Alien.As oppossed to little Green Men, we have one fat orange man trying to de-nuclearise the earth,basically by using all of the warheads he's got in stock....stupid stupiiiiiid!

The classic ruse of denuclearising the Earth... I doubt he will persuade the superpowers to fire all their missiles at Gorath, however.