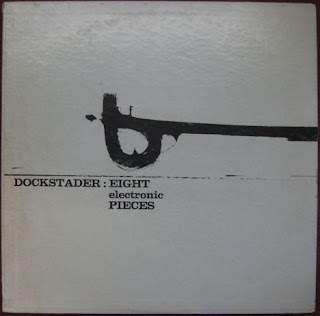 Thanks Tod, I knew I was the real talent behind all these musique concrete records.....as the man himself explains:

"Electronic music is recorded music -it exists only in a recording. The cuts on this record are not performances that have been recorded - they ARE the performances; you perform the piece when you play it on the phonograph."

Tod was a sound effects engineer for animated cartoons in 1950's Hollywood,when he must have heard a few of his contemporaries getting acclaim for making so-called 'Avant-Garde'records that sounded like the sound effects he was making for kids cartoons.
Smartly realising that he could do this 'Musique Concrete' stuff,he began making 'Electronic' pieces from 1958 onwards.
Not so smartly,he would soon realise that there's bugger all money in Avant-Garde composition, but it can lead to a string of easily impressed stalkers,similar to those who think Artists are 'special', and that Poets aren't just lazy short story writers.
Musique Concrete has many similarities with Poetry,and Abstract Painting,as its the easier route to making product.Just as Poets don't have the staying power to even write a pamphlet of their dreary prose,if they write anything at all,-the pose is the prose-,and Abstract painters don't even have to paint something recognisable,Avant Garde Electronics relieve the composer of the hassle of writing a melody...its too bloody difficult for starters.The only brain power needed is to dream up some confusing explanation to justify the general inactivity surrounding these finished works of Art.No-one can say you're not working when you're primarily a "Thinker".
The basic needs of the male can be met simply by covering his lack of actual talent with a thick layer of bullshit.This will bring him credulous young women,fame, to appeal to ladies he's never met,and rave reviews by equally pretentious and talentless art critics,to boost his ego.Yes 'Artists' of all kinds are generally lazy talentless bastards looking for a life livin' on easy street.
Whether Tod Dockstader fits into this category, I don't know;but he did manage to create this without going to a music school,and self-release his own album...all this in 1961. How many he actually sold isn't revealed, but Folkways Records later re-released it,eager to get on that darn Avant-Garde bandwagon that was gaining momentum by 1961.
Well I enjoyed it anyway...me being a pretentious feckless arsehole looking for an easy earner.Or,simply that i like funny noises....Don't we all?

DOWNLOAD and perform HERE!
Posted by Jonny Zchivago at 01:16

Man was a genius. If the latter day clip of him listening to his older work - and not realizing that it's him - doesn't move you, you're past hope.

Any chance you could post a copy of the long out-of-print 1950 unreleased bootleggy Ferrante and Teicher recordings collected as "Denizens of the Deep"? They modified their dueling pianos with bricks and beat on the strings with hammers, making a lovely racket. I cannot for the life of me track down anything but shit fuzzy mp3's mined from some sketchy Russian blog long ago.

@ Laughin' Tackle.....always an admirable thing is to not recognise your own work.A talent that Scott Walker had as well in his latter career.Once its been done NEVER listen to it again.Like it.

@ GLantern....i got a few Ferrante and Teicher,but they will appear when i do some Space-Age Batchelor Pad music posts.Not musique concrete enough for the current crop.
I'll look see if i have Denizens of the Deep.

Uh, JZ - find the clip. Not what we're talking about here.

I like the phrase Space-Age Batchelor Pad. I'm more Bronze Age Marital Home. Searched the blog for "Morgan"...on a hunch. I was right, there was the 'miniatures' collection. Knew it! Surprised not to see Hybrid Kids though :)

Monstrous. An analogue synth suffering from Tourette's. Boss listening here. Hearty thanks for the post.