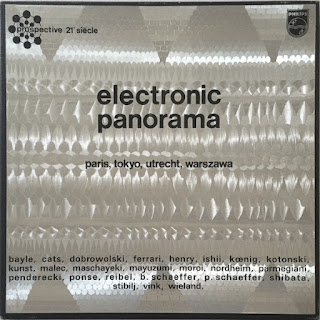 This is the 'NOW that's what I call music" for Musique Concrete,or "NOW That's what I don't call Musique" for most people. Looking at the pictures of the artists on insert cover, it seems that to make music like this you needed to wear National Health Service spectacles,wear a suit, have a side-parting even if you were balding, and be male! The being 'male' part was not an essential ingredient,as emphasized on this blog, by the lengthy 'Women in Electronics' thread wot I dun a few weeks back. And there's me thinking that Holland was a progressively liberal state.
More likely is that women,sensible creatures that they are, just don't wanna make silly directionless sonic nonsense, or Nonsense Sonique, like this;putting their undeniable talents into such popular male ghetto's as Football,getting blind drunk and mindless violence. 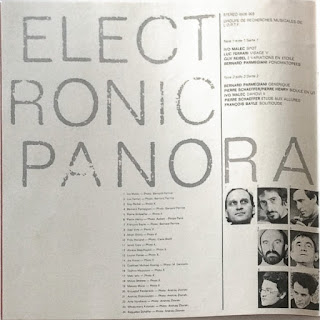 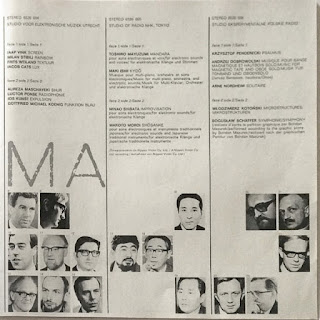 The intention of this four disc compilation was to show us nay-sayers that Musique Concrete was a worlwide phenomenon,and we do get some early noise pioneers from Japan,which is where the best disc in this quadruple album draws its tracks from.Was this the start of the japanoise obsession with how to damage ears without touching them....an extention of their interest in torture and disembowelling themselves at the drop of a hat.
The French disc, naturally has all the legends of Concréte, Schaeffer,Henry, Ferrari, Parmegiani, in fact anyone without a French surname.
After listening to the entire three hours and twenty minutes of this album, you will be willingly joining your Japanese chums with a celebratory disembowelling.After raiding this for a bunch of rather marvellous samples of course.

DOWNLOAD music to disembowell yourself to HERE!
Posted by Jonny Zchivago at 12:27

Uncanny. I almost remarked the other day that I suspect Steve Hackett wasn't posh, because those looked like NHS spectacles that he wore--and I'm not even English! Collin's auto coming up--in a day or two, cuz it's a single file for some reason (not separated into chapters, that is) and my internet is insanely slow.

Well, of course nowadays NHS spectacles are trés a la Mode in Posh circles,but in the 70's, I suspect steven may have been subject to a low income....which naturally doesn't mean he ain't posh.Most of the the british aristocracy are skint.
I await the collins with interest.

Frank N. Farter VD-Veneral-Disease-Kraut-Balls says hello. Please take down your last ten posts as all those releases are being reissued on a deluxe VD box-set out next week. Danke.

Jawohl! Anything you ask me to do....I do....you know that Herr
Kassetten Kulture Oberleutnant sturmfuhrer Frank N Farter of VD on demand Panzer division....the trouble is that this comment was far too self-effacing and polite to be the real fat Frank N Farter himself, so I rather think these very hard to licence recordings may well stay put.
Rather amusing though.Plaudits for an imaginative comment.