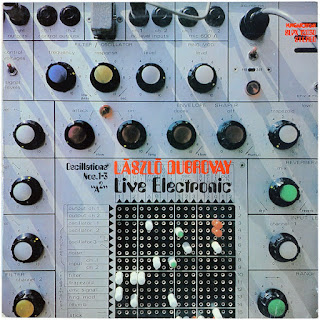 Any cover with close ups of an EMS synth is always iminently purchasable,and doubly so if it comes from behind the Iron Curtain during the cold war times.
For some reason communist Hungarians had a Stockhausen fixation, and enthusiastically made silly electronic noises and drew charts with the same efficiency as they helped Eichmann deport a million jewish citizens to the Auschwitz labour camp (notice how i called it 'a labour camp' to avoid know all anti-zion conspiracists telling me how many really died and how.....yeah we got holocaust fatigue as well as conspiracy fatique.....look I Don't Care understand!?...and yeah yeah yeah, I'm a Fascist,which is different to a Nazi by the way...well done you keyboard finger pointers....well done).
I figure that the only western records they could smuggle through customs were by Stockhausen,which would explain the number of serious electronic composers in Magyar land.....But that does not explain their numerous ,badly dressed prog bands, like the dreadful 'Omega',which i did feature on the blog, but ,true communists that they were/are, they made a DCMA complaint against me and the download had to be withdrawn(but you can check it here in the post on the terrible hungaro-rock album "Bum".
Its funny how former commies now make for the very worst capitalists.Humans do have a natural tendancy to burn down their houses to keep themselves warm,capitaist or communist.That's why, neither dogma works.
These electronic pieces are from the 'I've got a Synth and I'm gonna Use It school of 'Because I Can'.
A series of very pointless sound effects rechristened as music. Its great background music to a slow moving science fiction epic, or a wacky off-kilter fondue evening, but taking it seriously as a modern composition is strictly for the pseudo-intellectual in your cell.
Maybe this was an easy way to get a more favourable appartment in the brutalist tower block that László was allocated before he became an 'Artist', I dunno.Basically, he had access to an astronomically expensive EMS synth and his fellow brothers and sisters did not.....that's equality for you.
Good cover though.

Your first sentence pretty much sums it up. That, coupled with the fact that it's creator is named Laszlo means it gets plucked immediately from the record bin and marched to the register for purchase.

Screw the album, your post however contains SO MUCH WIN!

Why do you post things to put down as not real composition etc...
I can't believe it's only for the sake of sharing as such.So what' your motive, Johnny? To be able to show off your undeniable writting skills?

@bodhi....i put things down because everything isn't great.The modern music press does nothing but heap out praise to everything old and new.We need standards.But because i don't rave about something doesn't mean that it isn't worth sharing,I understand that my personal tastes aren't universal. If i only shared stuff i think is fantastic this blog would be empty,except a few PiL albums,and Joy Division.
And yes, the writing is the main aim,purely for my own self_entertainmant mainly.....but if somethings a bit shit,i'll say so....kinda depends on my mood.Another time i could say the opposite.
Thanks for the compliment anyhow.

Eichmann's nickname at school was Jewboy! Fact. Spent time on a kibbutz in Palestine and was fluent in Hebrew before joining Adolf and his acting troupe, oscar winners all.

Am I way off in thinking that that EMS products were the "budget synths" of their time (and place)? I mean, that dude in Hawkwind had one, so they couldn't have been that exorbitantly priced. Come to think of it, how did _anyone_ (who wasn't posh) ever get anything done back in the day?

Hahaaa I rather think the dude from Hawkwind was indeed Posh. All those prog/space rock bands were posh(eg Pink Floyd were always round Zivonieff's gaff), except for Phil Collinsthe normal one from Genesis,'ooowaz werkin klaaaasss'.
Any proles worth their salt were into Glam,when you could make yer own glitter outfits,and be satified with guitars,drums and hairstyles.
This deseminated into punk which was a mixture of posh (Crass/Clash) and prole(Steve Jones Paul Cook),then Post_Punk which was the nu prog,attracting the posh punks(Keith Levine), and the proles became the Exploited......the moral of this bullshit story is that posh kids got to make interesting music because they had rich parents and a trust fund, so they didn't have to be commercial.

AN EMS Synthi was around about £350 in 1970 which sounds affordable till you realise the average weekly wage was about £33. Adjusting for inflation the Synthi in today's Monet would be £5,000. Such comparisons though are tricky as a nice semi in suburbia in 1970 was only £5,000 adjusted for inflation that should mean it would cost £78,000 now whereas it may well be more like £200,000. Similarly some crazy dudes want £15,000 for their second hand Synthis. The moral is houses and Synthis are good investments.
Banker Bill

Yeah, my brain must have switched "cheaper than (an import, say?)" for "budget synth" years back and never corrected. I ought to be embarrassed for that, as I've got sufficient background to know such a thing couldn't possibly be cheap in 1970, but instead I feel a longing for those days of innocence before I knew, say, that Tim Hodgkinson grew up in a home with live-in servants. Kinda spoils things a bit.

John Greaves, believe it or not, wasn't (posh). He talks a bit about feeling totally out of place at Cambridge in the new HCow book, "The World Is A Problem." I, too, attended a high-falutin uni on a full scholarship, which was literally the best paying job I ever had (converted to today's currency, of course), so I felt his pain. I actually got stopped by campus security a couple of times because they thought I looked as tough I didn't "belong." Ha! Of course, security were "low class" sorts like myself, so I couldn't take it out on them. Almost three decades and I'm still fuming about that.

I couldn't really get a good read on Dagmar's circumstances, but it kinda seemed like she was working class--and she certainly sang about the proles plenty.

But live-in servants? I almost cried when I read that. I can no longer listen to "I Hate America" or "Living in the Heart of the Beast" in the same way. I mean, next they're gonna tell me that Phil Collins is actually a Baron or something.

I guess you could say that Hodgkinson's family were providing much needed employment to us cap doffing scum?
\but, this means i've gotts eat my bassoon......its a dead give away if you play a Bassoon or an Oboe...that = POSH in higher case.
I got streamed in the educational system, which lead me to be shunned by my peers in the council accomadation area I grew up in, so i kinda under stand the limbo John Greaves found himself in....this was the root of my 'hate Everyone Stance'...typical grammer skool boy is me.
I felt the same betrayal when i found out Ari Up was a fucking german princess,and so was her mother...Mrs Johnny Rotten!? Why do these posh fookers always want what we've got? Why can't they stick to governing and quaffing champers on the croquet lawn and leave us the rock'n'roll and the football?
You have a different kind of 'Posh' in the USA...Trump for example...the new money lot.... which is even more distasteful.

At least we still got Phil Collins?....I trust him to turn down a peerage or Knighthood,and suspect he already has.
On a sadder note, my girlfriends brother-in-law is being made a Lord by Boris Johnson....does that make me Posh by proxy?