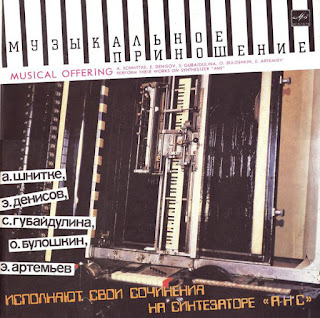 The Soviets insisted that anything the capitalists could do,they could at least match it,usually making these things on a budget of close to zero,held together with straw and snot, like their version of Concorde,the supersonic passenger jet,Concordski,which crashed at the Paris airshow in 1973. As soon as the "more Equal Than Thou" members of the Polit Bureau heard of the EMS synth,they wanted their own 'Socialist' version, that their great and glorious electronic composers could all use.......this was called, the 'ANS' synthesizer;notice any similarities there?
One of the first synthesizers in the world (aka in The USSR), it was created by the Russian engineer E. Murzin over a period of twenty years from 1937, and it created music using light, rather than electrical variations, unlike all other synthesizers,except Daphne Oram's Oramics machine of course.This replaced the soviet version of the synth which involved high voltage cables attached to the genetils of 88 Oboe playing dissidents,and a series of levers that, when thrown in a sequence, would apply the adequate voltage to make the dissedent play his allocated note on the Oboe stapled to his mouth. This was fully polyphonic,but had its drawbacks, like the oboe player dying, and it emitted an awful smell of burning ball-bag hairs.Now that's what i call 'Electronic Music'!?
For Murzin's light synth,he,or the KGB, invited,or ordered, young,but qualified, composers to come and work on some new electronic pieces....this time without electrodes or any pointing guns,and the resulting works are showcased on this post Berlin wall collapse album released by crumbling state label Melodia.

Recorded between 1964 and 1971,these bizarre dark electronic excursions didn't see the light of day until 1990,as the communist bloc was collapsing;but the rest of the recordings that never made it onto the album were rediscovered and are now included here as bonus tracks.Whoppeeeee.......now, where did I put those electrodes,and where are those cheap economic migrants I bought?

DOWNLOAD or you may accidently fall off a balcony HERE!
Posted by Jonny Zchivago at 11:54

This is a fantastic album I have had as a discovery on soulseek. Interestingly it seems to have been released as Early Russian Electronics 1964 - 1971 by the Elektrochok label.

Just want to add... The ANS and EMS synthesizers are TOTALLY different, they have almost nothing in common. The ANS, named after the composer Aleksander Nikolaevich Skriabin (who had "interesting" theories concerning synesthesia, among other things including symphonic apocalypse). The composers featured on this recording include two of the most famous composers in the world (Gubaidulina and the late Alfred Schnittke), as well as Artemyev who created the scores for Tarkovsky's films Solaris and Stalker with the ANS.

OoooooH we didn't know thaaaaaaat?
Now can you tell us about the soviet synth with the electrodes attached to the balls of gulag bound Oboe players; which was used in the soundtrack to the film "Vlad and Nikolai do Vladivostok".

And the best thing is it sounds like "anus". "I got some great stuff out of my ANS
yesterday","I can't wait to get home and twiddle with my ANS","Something's wrong with my ANS, It's making odd noises"... good thing his name wasn't Fyodor Uschenko Kyostoff.

I got a great farting sound out of my ANS, said the state approved russian musician.
This did occur to me,but i thought i'd leave it to the intellectual end of the readership to point this out.

My initials are PNS. Can't make anything out of that.