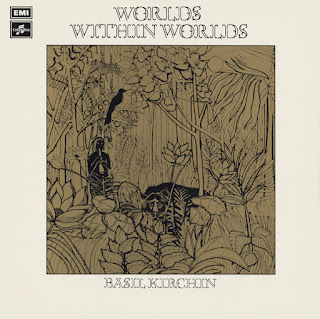 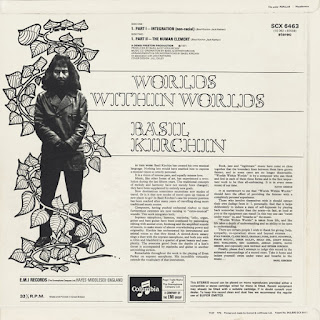 Looking like the Wolfman for need of a better description, Basil was a much overlooked innovator in the world of improvised music and tape composition. "Worlds Within Worlds" contains so many ideas,constantly shifting direction,that it sounds like a frustrated experimental musician's attempt at compressing all his ideas into this rare moment where he was allowed to express himself.
Any album where the sounds sources are credited to:
1 Gorilla
2 Hornbills
4 Flamingos
Various amplified insects, animals, birds, jets, and other engines. Sounds of the docks in Hull, Yorkshire... and the autistic children of the community of Schurmatt, Switzerland.

Augmented by one (uncredited)Derek Bailey, and Evan Parker,who were basically, the UK Improv Jazz underground.
Erroneously labelled the 'Father of Ambient'retrospectively,and a major influence of the 'other' 'father of Ambient', Brian Eno,Nurse With Wound was also an obvious recipient of the Kirchin influence. Basil made his living playing in jazz bands from the early forties and writing sweet tunes for the 60's and 70's UK Film Industry.
Let off the leash by EMI in 1971, Basil poured aall his ideas into this two part album,which is a whirlpool of found sounds,tape effects, field recordings,spontaneous improv,and jazz.Certainly a unique album,which was released in two parts...the first in 1971, and the second part, with the same title but different tracks, in 1974.....complete with ENO sleevenotes.
I've stuck them together, so you get the uninterrupted version,as originally intended.A bargain bin favourite,it never sold enough to justify the EMI conglomerate to allow the same mistake twice,so Baz stuck to film,and library music,but always continued experimenting off duty.The results of which are still being regularly released on the Trunk label.In,how we brits say,"Continental Europe", our Basil would have been made a professor at the national academy of Music...but he would have had to have a haircut,get some glasses,and wear a suit.You're either 'pop' or you're 'Not' in the UK.
It does say 'File Under Popular' on the rear cover?....hmmmm I'd love to see the face of someone in 1971 who took a blind punt on this?!

DOWNLOAD basils world into your world HERE!
Posted by Jonny Zchivago at 10:33

"Erroneously labelled the 'Father of Ambient'retrospectively..."

Ugh. Reminds me of coming across a Tom Dissevelt & Kid Baltan track on YouTube labeled 'First Techno Track' or some such cheese-whiz anachronism. The assertion gets worse if you so much as look at a picture of the people who invented Techno.

Yowza. More from this guy would not go amiss. Gold. Mega thanks for the post Mr. Z.

I'd be eternally grateful if you could locate this Kirchin release and upload it.