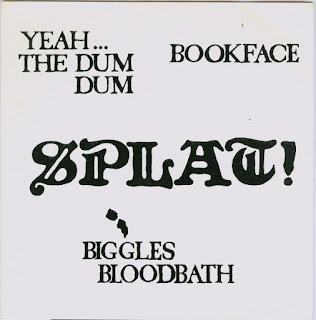 A1 Yeah The Dum Dum
A2 Bookface
B1 Biggles Bloodbath 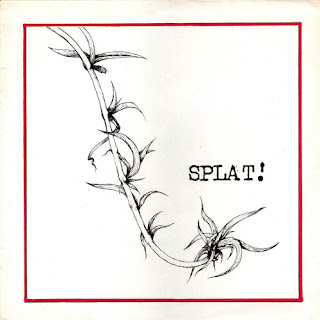 Long Eaton based (which is near Nottingham, for our non-UK subscribers), Ron Johnson Records' founder, Dave Parsons,was in a proto-Ron Johnson type group called "Splat!".
They sound like most of the other groups that appeared later on this label.A kind of a mixture between A Witness and Bogshed; which is a high recommendation indeed.
Much has been said about the inept business acumen of Dave, which led him into bankruptcy; all for the 'love of music'.
I don't think he was alone in struggling to break even with a business model such as this.He was as unlikely to find an indie "Tubular Bells" as anyone else in this trade; but aren't we glad he did it?
Here's an enlightening explanation from the man himself:

"In my defence as the useless money man - I was 21 when I started Ron Johnson and knew nothing about making records or running a business - I just loved music. [censored] of [censored] rough-rided me into agreeing to pay about £6000 out on [censored] - we paid out about £500 on Loudhailer Songs! I was naive and [censored] (nice person though he is) was deluded and the financial morass began there. Their records never sold well. The Ex double-single was a fiasco of Rough Trade's making - they sold it at a price that was lower than the manufacturing cost and because it was reviewed as such amazing product for such amazing price felt that they couldn't put the price up - it sold 15000 copies and RJ lost £15000! Fantastic. The only band who ever made a profit in RJ were A Witness and they have a right to feel slightly aggrieved. I gave 24 hours of my life for 7 years to RJ, lost my house, never made a penny and was eventually bankrupted because I loved the music. Cheers, Dave Parsons".

Hey Jonny, I was intrigued so much for your love of Ron Johnson records and my own love for the last few uploads on here that I looked the label up. There's a wiki page for it albeit a brief one. I was wondering if you would upload any splat as the ep called Yeah the dum dum (according to wikipedia) was intriguing.
Whatever it's called, I've just partook in your sharing and will let you know what I think. It's a shame the RJ guy wasn't a bit more business aware and maybe there'd be a lot more albums and ep's from that label to enjoy. But then again, maybe the music might not have been as great.

BTW I bought the Mark Automaton book a few months ago after see the add on here. Sadly have yet to find the time to get stuck in. Can you recommend I find the time?

I read a great interview with him a few years ago on the web where he said he would send out entire albums of music for free so long as the 'buyer' sent him a blank tape and return postage. What a guy. That type of down to earthness is the kind of thing I love in talented people. Not out to make millions. etc. I wonder how many people would be in the pop world if you told them 'at contract signing' that the label would give away they're music etc. Would make dance rehearsal for hours less enjoyable I'm sure.

Anyways I digress. Hope you're good. Thanks Jonny.

Well, in the last days of RJ records, it did all go a bit moody, withe the Ex , Sewer Zombies, and the Great Leap Forward....it was all a great leap backwards. So it all came to a natural end, financial problems or not.

I enjoyed Mark's book, but I would wouldn't I?...so it maybe worth your time.
The first tapes i had from deleted records were all free in exchange for a blank tape ans SAE.....this is how it should be.

Thanks for asking Jude, as always....i've been better.Had a shite week.All good inspiration for something artistic methinks.
Hope alls good witchoo....like your new website....good stuff....i'll put an ad on the blog.

Sorry to hear you had shite week. My life seems to be turning into one ginormous shite infested test. But enough about my woes.
I'll get stuck into the Mark Automaton book when I can.
Back in the day where there many british or otherwise artists who were doing the 'free music for tape and postage' thing? Or was Mark and co. a solitary thing of beauty?
An ad/ link on your blog would be great. Though don't feel you have to. I don't do anything in the way of 'promotion' etc and haven't the time or inclination nowadays to play live to a room full of drunks. Did that years ago, didn't like it much, simply because I have so many songs, I can't f*ckin' remember them.
Have a better week this week mate.
Cheers JZ.

The Splat! stuff is really good. What I found really refreshing, maybe it's just me. But it's nice to hear the bass in the mix. It could just be my record collection, but all too often the bass isn't pronounced enough. Liking the 'sound' of this band wholeheartedly. Did they just do a couple of releases? Cheers as always Jonny.

Mark Automaton was not alone in the send us a blank tape and an SAE method of distribution, but he undoubtedly was one of the first.

Yeah, i did the try to learn songs thing once too....no fun. Once something is written its the end of the story for me.Thats why my current group, ZOG, don't have any songs,we just make it up as we go along.Much better.....with Bass at the forefront.

Splat! only did these two ep's, then Dave went into business, as we all know.And lost everything.

Nice to see/hear people discussing the old RJ stuff. And particularly Splat! - as we never really got that much recognition. A couple of plays on John Peel and a tour of the Netherlands!

Hello Dave,....As you were in Splat!, I assume you have a increased vested interest in their slowly rising profile of late.....good stuff, especially as I never got to hear them back in the day.
Also, I would like, on behalf of myself and everyone else who follows this blog, to give you a 'big up' for the outstanding work you put in to one of the greatest record labels that ever existed.Even though it cost you a lot of grief, it was an era that loomed large in my formative years.
If you've got any unreleased Splat! or otherwise, i can think of a very good portal for its exposure...ie right here.
Respect.
JZ