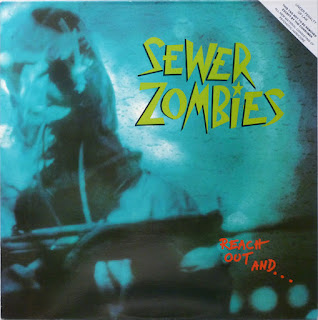 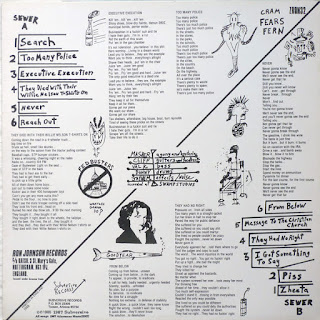 It became clear that all was not well at Ron Johnson records when, in desperation, this pile of crud was licenced and released, to try and compete with local rival label Earache; who had cornered the new wave of abstract hardcore , with Napalm Death and a plethora of similar metal/punk hybrids. Earache, from near-by Nottingham, were not only the fastest growing independent label, they were raking the money in.Every release stormed the Independent charts with careless abandon; whereas Ron Johnson were running out of steam. The Sewer Zombies' flatulent fuzzy US Hardcore,was, along with the hugely disappointing Great Leap Forward (bIG fLAME offshoot), were the final nails in the coffin of RJ records.Comfortably the worst record on this hallowed label.

DOWNLOAD this shit into the sewer HERE!
Posted by Jonny Zchivago at 12:30

Yes it is.....click on the download icon in the right hand corner of the screen (the downward pointing arrow thing).....then a warning comes up, then click "Download Anyway"