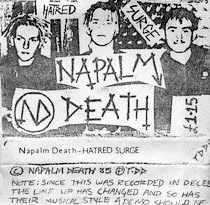 Before the Grind took hold, our buddies in Napalm Death were carbon copy Anarcho-Punks; they were even featured on Crass Records' "Bullshit Detector Vol.3".
However,the band information on this post is in fact wrong! The line up on this tape (also left to right in the picture on the tape cover) was future GodFlesh,Jesu and Head Of David supremo Justin Broadrick on Guitar, Nick Bullen Vocals and bass and Mick Harris on Drums. The line up listed was the original line up before Mick joined and became the "Grindcore" legends we know today.It even says so on the cover flap..."The Line Up has Changed And So has Their Musical Style". Although one song, "Instinct Of Survival" did survive by instinct, to appear on "Scum" and in the "Peel Sessions",as a revamped and shorter beast altogether.

So, in fact, Napalm Death hold the record for the longest time a band has existed without any original members, 1985 to present day.I think that even beats Fairport Convention(?), and Dr Feelgood?
I do like the idea that No-one is bigger than the band,a bit like football clubs, but without the transfer fees.

DOWNLOAD some proto anarcho-grind HERE!
Posted by Jonny Zchivago at 14:17

Reading your latest post, not this one, I had no idea ND ever released anything on Crass's label, nor did I ever imagine they were punk, other than in philosophy and ethos perhaps.
At high school, the 'dark' kids would tape releases like these at home for a pound and bring in the next day for you complete with local newsagent 10p a side b and w photocopied inlay (if you were lucky) otherwise biro scribbled track listing on a maxell inlay from a kid who masturbated too much and really needed to cut down on greasy foods! Sorry I've been wanting to get that off my chest for a long time! I miss those days, you made social contacts and friends like that. You would find out who could play guitar and it was something you could talk about other than football, ie. what kinda bands you listened too etc. It got you invited to parties and girls phone numbers who dyed their hair black. Oh No! Not darkest, evilest black.
Nowadays we do the same things more or less but with a computer inbetween the humans and we still converse and rave and rant about our favourite bands, but to people we'll never meet, people we don't know what they look like or sound like. Tim Berners Lee (think thats right) has a shitload to answer for. In Northern irelands news today a 14 year old boy was arrested in an undercover operation by PSNI for trying to buy a machine gun and 100 rounds of ammo on the dark web.
I'm sorry Jonny, I'm really digressing. I miss my tape collection, about 15 years ago, I had a huge bookcase full or tapes, blanks, originals, copied, 4 track recordings and album masters. One day I looked at it and thought A: it's taking up too much room, and B: the cassette tape is dead. I then proceeded to put the 1000 or so tapes into bin bags and take to the dump. What a fucking wanker I was that day! Kids, don't burn your mini discs just yet. Don't even delete a single mp3 from your slowed down to a crawl hard drive!
Hate to disgrace your hallowed pages with the name of this band, but on a slightly similar note to longest running band with no original members, my estranged wife many years ago liked a girl group (shite) called atomic kitten, you're probably (for the worse) familair and it seemed everytime they released a new single they changed a fucking member.
What is common though to both bands, yes, and I realise that one was completely manufactured by slavemasters, is that I think if a band is greater than the sum of parts (as you said rightly) and you stick to a plan, ethos, path etc, and you 'rotate' the cast for whatever reason, it can work. A guy I like is Neutral Milk Hotel whose live and recording band featured many different members from the Elephant Six collective. At any one time several of these crew could be in several different bands on that label. Good idea eg. I need a trumpet player for a song, call Steve, yeah and so on and so on.
Fair play to ND, I wonder just how many world records they hold in total? 'Dedication is what it takes!'
Soory for the rant, forgive me, I've just had to endure 2hrs 9mins of Beauty and the Beast at Local Omniplex. I need to stick The Holy Mountain on, or something in that vain.
Night Jonny, hope I'm still welcome tomorrow.

A couple of comments...

The cassette cover shown (and the one found around the internet) is not the actual original tape cover. I think this cover was cobbled together at some point in the early 1990s, using cut up elements from Total Cannibalism fanzine (Issue 1, Birmingham)...

The line-up on this recording is Rat - drums, Justin - Guitar, Pnut - Bass and Nic - vocals. This line-up only lasted for about a month and I can't remember why it even happened (as I was doing bass and vocals beforehand and then the same again afterwards)...

4 of the songs on this tape carried on being used by Napalm Death and were recorded on 'Scum' (albeit in slightly different forms)...

2 of the songs were from Justin's first group Final. I first met him at a stall in a local market that sold bootleg tapes where we bonded over a shared interest in Throbbing Gristle and 'Power Electronics' (alongside Crass, Discharge, Killing Joke, etc.). We made a number of 'Power Electronics' style recordings in 1983 and 1984 using his stepfather's Wasp synth and effects pedals...

The blog is great as always, by the way: nice to see the slew of Ron Johnson releases...Can I make a request: do you have the Irrelevant Wombat 'Advantage of Youth' compilation tape that featured the other version of Exhibit A's 'Bollards'? I haven't heard that since my tape of it snapped in 1982 and would love to hear it again...

Beauty and the Beast AND Atomic Kitten?????....what kind of special hell do you reside in Mr Vigilante!?

Many Thanks Nic, for correcting my misconceptions....this is a common failing for a lot of cassette releases.
I, sadly do not have the Irrelevant Wombat comp version of Bollards....but i will put the feelers out to get some sort of version of it.....Exhibit A were great.
Thanks for your kind compliments

Beauty and the Beast was torture, a sugar coated torture, Water boarding with Pepsi max if you will. But my 15 yr old daughter liked it so I was happy to oblige.
I get your point though, sick and twisted, I admit. Guilty as charged Jonny.