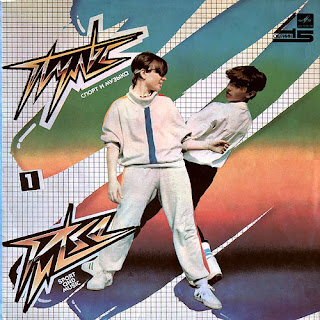 Allegedly, this, on the cutting edge of youth culture relic,came with a free course of Steroids,which was the Soviet equivalent of the half-time Orange in the communist sporting arena.......of course I am joking,but the Soviet sports ministry weren't, when nearly all athletes for the CCCP were drugged up to the eyeballs in a desperate bid to out-do America and her allies.Which is still going on today,except now Russia are very Banned,hopefully forever.
In 1985,they had lost the space-race,were losing in the Arms-race, but the eastern bloc were untouchable in nearly every Olympics race.
This all sounds rather despicable,but at least they reserved the raping and enforced terminated pregnacies for the 14 year old female gymnasts.It made them more flexible in competition apparently.
I don't remember reading about this in Das Kapital!?
The Polit bureau preferred their comrades in the proletariat to exercise in silence,no screaming either no matter what your coach was doing to you; but word had it that a new fad had emerged in the USA called 'Aerobics',according to high level intelligence reports. Otherwise known as 'Exercise to Music'. An evil decadant capitalist called Colonel Jane Fondle,as stated in top secret KGB microfilm, had begun a mass undemocratic mobilisation of female special forces to stealthily learn hand-to-hand combat techniques ready to be parachuted in, pre-emptively,to attack Russian infastructure before the invasion. The uniform of pale pastal shades, headbands displaying rank, and so-called 'legwarmers, to conceal chemical weaponry, was obviously a new form of Dazzle camouflage.
This album of the latest modern music is the USSR's answer to this sinister threat against their gloriously dour existence......i'll let the ministry of sporting glory explain further:
The following introduction is taken from cover:


"Physical exercise to music can greatly help to organise rationally our work and rest. Both musical and human motion rhythms may be classed as "functional", with an essential influence on Man's health and productivity.
The present record is a joint venture of the Melodia sound-recording firm and the USSR Sport Committee, first in a planned series under "Pulse" heading meant to emphasize the vital importance of phisical culture.
"Pulse 1" of the "Sport & Music" series is recommended to accompany coaching sessions, sport festivals, competitions and other active recreations.
The series will be sufficiently versatile to adapt to various purposes that music can serve in sports.
The series' first disc (30 cm diametre (12"), 45 rpm) acquaints the public with electronic music composed with the help of an individual musical computer, for the first time in the USSR.
The scores were created on the display with the subsequent recording to magnetic tape. The composition is based on suites of contrasting instrumental miniatures.
We hope that the joint effort of Melodia and the USSR Sports Committee will promote Soviet electronic music in sports."
(Field Marshall Vladimir Z. Leotardov, Chief inspector of young ladies bottoms and Beach volleyball Minister 1955-86;died of Radiation Poisoning at Chernobyl,1986, after fondling several firemen.)

Hi Jonny! Have you heard about the "most mysterious song on the internet"?
Basically, it's an obscure post-punk song someone recorded from German radio 30 years ago. The song was uploaded to YouTube and no one seems to know anything about it!
Here's the song: https://www.youtube.com/watch?v=zPGf4liO-KQ

Loving these synth from behind the Iron Carpet-posts.

Merde!....thats the second time on these soviet exercise posts....I don't think Putin wants these out there!.....I've fixed it by the way.

As for the most mysterious song on the internet....no idea...is it east German? Sounds bad enough to be.

I heard a minute of the 'mystery song.' It made no impression whatsoever and didn't feel the need to investigate. Another crappy song, big deal. Then again, I imagine the billions who have checked it now have malware running on their devices for Russia, China, USA, North Korea, Ukraine, East Mongolia, et al.

Johnny, what do you breed all the bullshit that MI6 pulls from the ass and feeds morons. This country was completely different. Although the British, as always, know best ...

Anon... Did you mean to say 'why' or 'Where' do i breed MI6 Bullshit?
Why?...its fun, do you remember fun?
Where?....in my mind controlled brain presumably.
Of course you and I aren't morons are we?
And, yes, the British always know best.....just look at Brexit for example.

thanks for the answer, Johnny! very glad you don't give up

i translated the above comment in russian....someones upset:
"I will write in Russian, as I know English very poorly, and through Google translator will be a bad translation, I hope there is someone to translate it to you. Enjoyed reading you until I read this post! Why write so, what your hatred for modern Russia, and the times of the USSR are long gone. It is not nice to write so about the man who died because of the accident in Chernobyl - this you, at least, insult the memory of all the people who died there and suffered from the consequences of this terrible tragedy! And it is shameful to read your nonsense about the rape of 14-year-old gymnasts with the approval of the Ministry of Sport of the USSR."