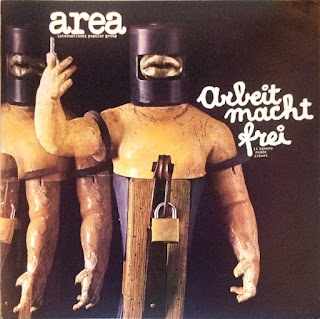 There are times when one should be humbled by musicianship, and this is definitely one of those rare ocassions.
Comfortably in the top three of Italian Prog, this debut album by prog-fusion commies, Area, blows most similar,jazzy Canterbury style bands out of the water.Just like the Royal Air Force did to the Italian Navy using outmoded bi-planes loaded with torpedo's in the early days of WW2.A tactic copied very sucessfully by the Japanese at Pearl Harbour.
There's a nifty extermination camp vibe as well,which apart from some ear shredding yodelling,makes this ferocious record nearly perfect;but, perfection is a quality that should be avoided at all costs,which Area do, so that means this is perfecton by default.Try and explain that to an alien computer in Star Trek and you'll end up with an explosion on your guilty hands.

DOWNLOADing this sets you free HERE!
Posted by Jonny Zchivago at 08:24

Yes this is absolute perfection right down to the yodelling. I love it when a bunch of guys that can do and play exactly what they want with their voice and instruments - decide to do this! Its a similar attraction as with some of my favorite post-Coltrane free jazz. Completely unique, but I think of them as (early) Magma's younger, wilder italian commie cousin.

Commies, Pearl Harbour, yodelling, Star Trek, guilty hands!
I normally dislike references, but you used them to
really explain what we're going to hear. Excellent. The
"attitude" impression left by that dense paragraph is the right one for listening. I'm not a robot.

You should have discovered an essential work of the musical arts. I'm not a robot either, but that didn't stop a couple of (thankfully now ex-)girlfriends labeling me so.

Area are one of the few that have aged this well. Their fifth release Maledetti (Maudits) is still the cat's ass in my book. It's like the level of virtuosity got so formidable that by the last track it all broke down into berserk abstraction which carried on to the next album that was entirely pure chaos. Just looked up Maledetti and learned the track SCUM was inspired by a radical feminist manifesto written by Valerie Solanas. It purportedly stood for "Society for Cutting Up Men", a laudable pursuit, though she denied it. Too bad she devolved into a Manson-like murderous, paranoid schizophrenia fueled rage. At least the gun jammed. https://en.wikipedia.org/wiki/Valerie_Solanas

That SCUM shite is a ,major preoccupation of Phil Best of Consumer Electronics etc...a bit silly. You can buy SCUM tee Shirts from him if required?...no thanks.
One must admit that the Maledetti album is not one of my favourites for reasons i am not at liberty to divulge as i'm not at home to re_listen. Everything up to then was fantsastic.
I used to hate virtuosity, me being Punk influenced an'all,but thats due to the music of envy era i grew up in. Thanks to acid house/sampling etc, i re-discovered jazz, then i could escape the slippery slope to the exploited. I'm beginning to think thqt everythngs shit....;I suspect this is correct.....we're all gonna die! The only valid ,music is improvised stuff that isn't recorded; an accurate description of whats in store for us...so why fucking bother?

Nah, don't need no stinkin' badges, t-shirts or any other swag. I was all about prog and avant jazz when I first heard about punk. Some friends were echoing what the media was whining about; 'It all sucks, they can barely play their instruments, blah blah' Thing was, when I went to my first show, by and large the bands just ripped like crazy. How the hell can they play that fast and hold it together?!? The attitude was all 'I don't give a fuck', but a lot of the playing was pretty fantastic. Even the bands that did suck and didn't play all that well still won me over because they really didn't care, a welcomed escape from narcissistic 'stadium rock' and a breath of fresh air, stained with beer and puke as it were.

At about 3:15 into the last track it suddenly sounds like the middle section of "Soup" from Can's Ege Bamyasi, and the singer is about as close to Damo Suzuki as anyone I've heard. Interesting album with lots of brilliant bits, and no one breaks out into "The Barber of Seville" ...what I subconsciously expect most RPI singers to do at any moment, with the exception of Goblin/Cherry 5, who were the best of the genre IMO.