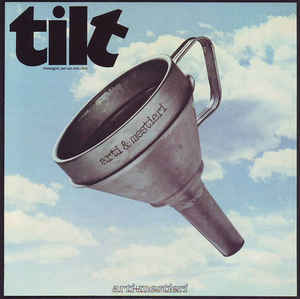 This one is tilt-ing towards the Jazzy end of the Prog spectrum, A Kind of an italian Soft Machine meets the Italian Mahavishnu Orchestra,via an Italian King Crimson.
Lashings of Italian Mellotron, the Italian singing isn't appalling, the Italian musicianship is beyond superb......È bello.
Got no funny stories about Italians, and I don't feel like slagging anyone Italian off...except maybe a certain straw haired Old Eatonian of Turkish extraction, and say that Boris Johnson is a fat lying privileged Cunt.

DOWNLOAD to earn your replay HERE!
Posted by Jonny Zchivago at 23:32

On a cold Friday night in 1975 I was at a local used record store and this guy with a heavy southern (US) accent was selling some records to the clerk. Along with the standard rock albums were lots of progressive stuff, Gentle Giant, ELP and the like. I picked up this record which I’d never heard of and the guy drawled, “Hey, that’s Tilt. They’re good.” Even though the guy came off as more of a Lynyrd Skynyrd fan, I took a chance, glad I did too. For years I thought Tilt was the name of the band. Agreed, a very high level of musicianship here, just before that became an end in itself and this type of thing turned into insipid noodling wallpaper.

Regarding Boris J (England’s very own trump-you lucky devils), what is it with Anglo Saxons? Some other cultures are forced to suffer under dictatorships without their consent, run by penis-headed assholes, while we in the 'free world' CHOOSE to have these same types of spud nuts as our leaders. So much for "white supremacy."

Yup, thats democracy for ya.....the right to choose your own dictator.
However i think Mr BJ has a large surprise awaiting him next month.

Yeah, that'll be a hoot.