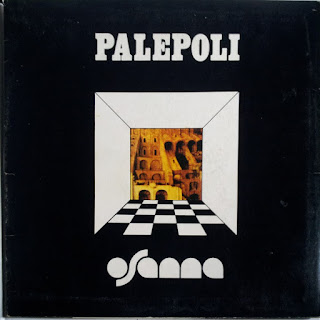 Back in 1977, I never used to even recognise that stuff like this existed, even though I had a copy of Tubular Bells, and Pink Floyds 'Animals' album somehow. I heard Peter Gabriels Genesis for the first time about ten years ago, and, there may still be some heckling from some sections,but fuck them, its Good.
As a kid I liked Queen(still do...up until Hot Space anyway), they were Prog too. But even though 'Animals' is one of thee darkest albums ever made, it had to make way for shite like The Drones,Slaughter and the Dogs, Sham 69. Even though I love those B-punk groups for different reasons that I love Italian Prog ,it was kinda obligatory that you rejected the old order.Times were different back then.I would have died to have been caught with a Genesis album in my possession.As it went, I had to hide my Pink Floyd album,and stash Tubular Bells in the attic.
I got into what was later called 'Post-Punk', which I still regarded as 'Punk', when really it was new Prog, but without any musicians,and better clothes. The Adverts great(most thought it shit!?) second album was a Prog concept album made with zero musical ability;I'd love to hear what Osanna could have done with 'Cast of Thousands'.One day i'll remix it and turn it into a west-end nostaglia musical then you'll see.
'Twas implied that the musicianship on Prog records was elitist,therfore the kids invented Punk Rock so that they could have a go.The music got dumber and everyone could say that they were as good as the bands they went to see.Then the bands themselves were trapped in a one chord prison and disolved up their own arses.The inclusiveness of Punk rock in effect destroyed it,along with the human flocking instinct to be the same as everyone else,while at the same time believing they are different.If they really wanted to be different they would have liked the music all their peers hated....Prog.
Magazine were as close as you got to Progressive Rock in 1978,but that sounds like a bunch of sneery nursery rhymes compared to "Palepoli".
You know what you're gonna get with this one.Two side long tracks full of light and shade,difficult time signature changes,shifting intensities,tempo's,and Mellotrons....did I mention there's a Mellotron on it?.yes?...well there is.

Thanks for your shares. Spot on with Queen. Jazz was the last for me with the exception of Under Pressure and Hammer To Fall. Thanks Again.

A great big mess! Sounds like a lot of other bands but still unique.

Oddest thing is the sax/flute player. Decades later Elio D'Anna has assumed the role of European ambassador for questionable economic development programs. A Trump buddy, too. Yikes!I like the guy's comment about about this LP.Too edgy and irritating at times.

Great to see this album getting some love - total killer surprise LP I have been into all by my lonesome for a while now!

Queen's first four or five albums are Prog operas of the highest order....the days before the 'Tash'. If you say you think Queen are 'Good', thats all they can think of....the moustache.

Yeah Steve, Prog Rock seems to suggest something Right Wing to me,so it doesn't surpise me that some of its protagonists are 'Trump Buddies'.....especially the Italian ones.
Can't think of any American Prog except Pavolov's Dogs and The Residents (Controversial choice that one?).

Maybe now that they've gotten old but apart form the Ayn Rand-fanboys in Rush I don't think I've ever heard of any actual "prog-rightwingers" back in the 1970's. Among the italians specifically you'll find plenty of communists, but no fascists (well to my knowledge). Its just as easy - or easier to find Trump-buddies and such among ageing punks really.