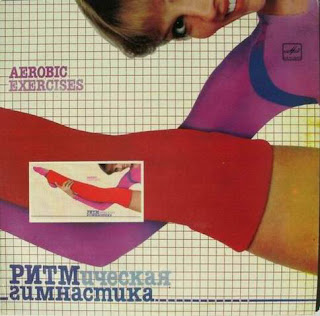 "This disc prepared by "Melodia" together with the USSR Sport Committee will replace the teacher. This record is the first in the series of programmes in aerobics, intended for collective, individual and even family exercises."...it says on the cover.

Replace the Teacher?....what happened to her?
Reassigned to do important heroic work treating radiation burns at Chernobyl no doubt?She's now long dead after contracting Non-Hodgkinsons Lymphoma at the age of 29.Then posthumously decorated as a Hero of the Soviet Union before being cremated as a radiation hazard.
The image of Jane Fondski on the cover clashes with my preferred vision of a Soviet Aerobics Instructor. A steroided up brute of a woman with a five o'clock shadow,stuffed into a uniform,stomping through the exercises wearing jackboots and a scowl.
I certainly feel a need to obey the voice on the record, if only I knew what the fuck shes banging on about.
The dialogue set over the top of some elevator synth pop could easily have been something that Jim Whelton ,of Homosexuals/Die Trip Computer Die fame, would have made back in the eighties as L Voag or Gus Coma. Far weirder than anything Nurse With Wound could have hoped to have made back in the day.But it was just another day in the asbestos factory for the Melodja back room staff.
You may think me in need of,or already on medication, but I play this album a lot....its out there maaaaan!

DOWNLOAD the heroic socialist pain and feel those electrodes burn HERE!
Posted by Jonny Zchivago at 08:55

"400 Bad Request" it says, and me who wanted some russkie omoh exercise...buuhäää, damn.

Sorry about that chums.....now fixed the link. I suspect some dodgy anti-western hacking that fucked up the link....can't these former soviets take a joke?

This is the greatest of all music mankind has ever produced or that I have heard. Plus it reminds me of TG....thanks!

I think you're right Kevinesse....i put TG as a sound-a-likey, but erased it and put Nurse With Wound instead.....fed up of using TG as a reference,its like using The Beatles as a comparison for pop groups.
Was it you who wants Elvis Costello at Rockpalaast 1978?....well yeah I do have that funnily enough...i'll get round to uploading it for ya!...wot service.

How did I live without this?!?! I now am join comrades in make body and thinking strong like bear!!!

hooray on elvis request....saw a video of the show and it was smooookin
thanks

Dear Kevin, i am uploading it. Declan seems to having tuning issues,standard Jazzmaster problem i found.Stick with Japanese guitars I say.....will put link here,and on the Live in Leicester post.

It would be great to get a translation of what the motivational speaker/cheerleader is saying. I’m sure it's inspiring. *Dance young comrades. Grow strong for Sport Committee to represent nation to world. If that not work, we pump you full of growth hormone. Same diff, correct? You can keep music to disco dance*

this is so cool! and with separated tracks! gratefulness.