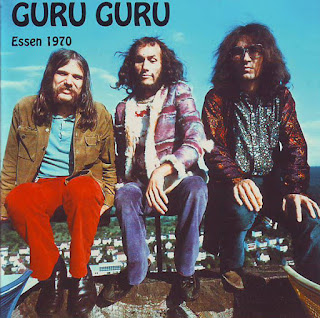 Looking at the repulsive band shot on the cover,This is what I always imagined West Germans looked like. Rather like Americans and Japanese think Brits always run around in suits,wear Bowler Hats and carry an umbrella......and worse have an errant son with a red Mohawk who hangs out sniffing glue in Camden,with the rest of the Artful Dodgers gang of pickpockets.
And of course its nearly all true, because most every German I've encountered looks like a member of Guru Guru,but I can't find a Bowler Hat for myself that actually fits!
Despite, what dull commonsense retorts I may receive to the contrary, its a laugh to be able to spot any nationality from any generalistion at 1000 yards. See a dirty Hippie, and a pound to a pinch of shit they'll either be French or German.Get closer and the smellier ones will be the French version.Also the French version will have, invariably, some ali baba balloon pants, and a scarf adorning neck and shoulders, singing the praises of Zer Doorsss,and Soopertrrramp.
The Germans have better taste in music,so they're easier to spot.
Guru Guru, like Jimi Hendrix a lot,and it shows in their particular style of Free Rock mixed with a bit of Ornette Coleman theory;both big names to drop in late sixties universities.
Ax Genrich,not anywhere near Hendrix's level of guitar craft,is mixed rather low in the mix for this Live outing at the 'Essener Pop- & Blues-Festival in Essen 25/10/1970;but he does manage to make some jolly pleasurable noises,that would have made a great soundtrack to the thousands of tonnes of TNT the RAF dropped on Essen in World War Two, many of which were dropped by my late father.So, sorry to any family member of the very polite audience who got killed by my fathers bombing....after all, he was "Just Obeying Orders!?"

DOWNLOAD the essence of guru guru HERE!
Posted by Jonny Zchivago at 12:39

Johnny, you are breaking my heart. I was positive that you wear a Bowler hat, at least while having black pudding for breakfast!

I happen to live in Essen, luckily late enough after WWII. I lost no family member afaik, but it's still a pity so many beautiful old buildings are lost because of the bombing. What they built after that is often quite ugly.

Well, I actually wear a Beret now that i live in France!!!? I like a bit of Black pudding...and no I don't mean having sex with a black man.
Yeah sorry about my nations over zealous revenge bombing....never said that to my dad however! I got a few family armed forces members buried in Belgium and France,so there!
My home town was twinned with fellow Ruhr town Krefeld...that he also bombed!
Ugly bombsite reconstruction had its zenith in England....have you seen Coventry! A modernist/brutalism nightmare(the Specials wrote 'Ghosttown' about it)...good modernist cathedral though, where Tangerine Dream played in about 1975....i think a recording of that is on this blog somewhere.

Ah, didn't know you were an *well integrated* Frenchman now! Kissing all day and drinking Café au lait, I guess?

No, I haven't seen Coventry. But telling from the pictures on Google it's not that bad!?! At least the modern parts look *really* modern, not like the boring 60's and 70's trash you find in Essen or Krefeld.

Didn't know that "Ghost Town" was about Coventry.

Will look for that TD recording, that was a good period for/of them!

"both big names to drop in late sixties universities"!
ha ha ha ha haa, so true, but it is great how it just meanders and digresses. Hendrix mostly always wanted to get back to the song and had an end in mind. For me, that ruins it.

I can't get over that picture. Weren't they the ugliest band of all times and the whole universe? Except for the Simple Minds' singer, that is.

Btw, that's how average German men look today. Of course most of us are in better shape:

No!!!! oh bollocks I apologize, Just looked at Essen, it is horrendous! Is that a manicured bomb crater as a park???? Then I looked at images of coventry and it looks gorgeous!!!!! Sorry coventry.....although I hate your fucking football team!!!!!!!No one bothered to bomb Leicester(my home town) 20 kms east of Coventry,ze only mqde shoes and clothes.
Whats wrong zith si,ple mi,ds?....bur qfteralL THEY are scottish,so they don't count.
Yes Essen is horrible! I'm shocked.
Sorry again!
I'm not integrated as a frenchman thank fuck. Can't stand the bastards. My dad always prefered the nazis to the french. They never helped him when he crashed in france. You may have seen thee post i made last year when i scattered his ashes in brittany......i'm eating so i will provide links for that and TD in cov.

and my holiday in brittany plus submarine pens in st nazaire:
https://dieordiy2.blogspot.com/2018/09/various-artists-second-city-statik.html

I like Essen though, it's my home city. Guess it's an acquired taste :)

But what do you mean by "a manicured bomb crater as a park"? Have a picture link?

Thanks for making me spill my coffee... all over my pants :)

I once worked at festivals selling shitty clothes from South America, also did a few festivals in Germany, I remember one was called Rock Am Ring, close to Frankfurt, compared to the crowd that was walking around there the guys on this cover are beauties, never seen so many leather pants with bellies hanging over them, never seen such a huge collection of greasy long hair, and they wouldn't buy shit!!! The second day we were all confused, almost only 14, 15 year old girls, why? What's going on??? Yeah, Bon Jovi will play, God it was terrible, I still have the scars on my soul, after that Van Halen played with a fat, tired old Sammy Hagar singing, it was good thing I didn't have a machine gun 'cause I would've gone all Columbine on the crowd. When they finally finished Status Quo came on and they were fantastic!!! I was jumping my ass off and I managed to get the most beautiful girl at the festival in our tent at night :) All the other sellers hated my guts, "so you got her, you lucky fuck!!" A red head and she would walk up to anybody and tell them their sign, You! You are an Aquarius! You!!! You are a Virgo!!! And she had it right every Goddamn time.... Nest day early we had to leave for Denmark to sell at Roskilde festival, terrible drama, Ich Bring Mich Um!!! she was screaming, holy cow!!! I actually went to visit her in Frankfurt a few weeks later, huge fucking mistake, found myself with her friends, guys who were all in love with her and who hated my guts, a miracle I didn't get into some fights, she was in a horrible mood the whole time, she then found out she was pregnant, not by me, somebody else and that would be her 3rd abortion in like a year, time to get the hell out of dodge!!! Never saw her again but a few weeks after coming back to Holland I got a call from one of her friends, asking if she and a few friends could stay at my place in Rotterdam for a few days, eh yeah sure why not.... So they came, some 10 people squashed in a van with loads of percussion instruments and they went playing in the city, Rotterdam and they actually were really good, collecting loads of money... When they left my house was cleaner then ever before, one of them had used my phone to call to Germany and left money under the phone, 25 guilders which was way more then that call cost, German efficiency!!! The red head by the way wasn't German at all, she was from Serbia....

Ah, I see. But can't make out what that place is. I think a flooded gravel pit.

Staus Quo rule!
God yeah,makes me glad i was a hermit,hate people,especially hippies...greqt story though. gotta sleep, will maybe write more in the morrow.

Yeah :) We also went to another festival that time, something called Rock Over Germany... At night me and my buddy went looking to score some weed, saw some sort of pub and I swear, I honestly swear, the whole crowd were singing Nazi songs!! We got the hell out-a-there.... Going to Denmark at the border and we saw it was going to be trouble so I ate all the hash we had, made it to the ferry and I tried to do a salto and nearly went over board, I know we did 3 festivals in Germany but for the life of me, I can't remember what the third festival was... When we finally made it to Roskilde we hadn't showered for like a week, we were stinking so bad we couldn't even stay in our own tent. Found some farm were they had showers and the woman who ran that place jumped into the shower with my buddy, her husband, some super fat old guy named Alfred was NOT amused.... Later they tried to offer me their 13 year old daughter, ehrrr, no thanks but no thanks, Danish people are freaks!!!

Yeah, its a good job that we Brits and Dutch are so sensible innit?...."Rock over Germany", what a great name for a festival?

Well, we are known for putting fingers in dykes, so...

Dear Mr z,
as a native Essener I have to admit that my home town is definitivly not a peticular pituresque place and it is a crying shame that authorities in Essen after the war made it even worse by replacing old buildings which survived the war with cheerless architecture.Its mediocrity may make it lovable for us residents. Pity or despite causing native love?
Here is a bizarre story about bombing my uncle, born in cheltenham in the late 1920ies, told me once. One of his aunts gave birth to a child with a hare chart during WW1. She blamed it on an attack on London by a german blimp she experienced.
I must admit, I quite enjoy those nazi cliches in old movies especially war time cartooons( "ve have vays to make you talk") and this episode of faulty towers (don´t mention the war) almost made me wet my pants.
I definitly don´t like all the music you post on your blog but I very much enjoy your comments on music and the general hopelessness we stuck in.

The only somehow nice recording from Essen I could find:

Yeah I love anything with Nazi's in or Germans and how we British interact with them.....my fav clip concerning this is one by Harry Enfield as Jurgen the German....this has actually happened to me!...

Fear not, I too am accused quite often of not liking the music I write about so don't feel bad.