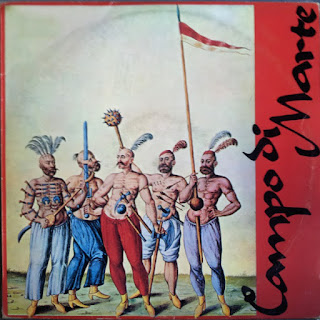 Ah, this is what I like to see...band forms, makes uncompromisingly unpopular music, splits up before album release.....never heard of again......well,... until this stuff got popular with us music nerds and they reformed to play lucrative live concerts that is!
This is classic complex Italian heavy symphonic prog portraying a loose, 'war is futile', concept.Something Italians are very familiar with, after changing sides in both world wars and building tanks with five reverse gears and only one forward gear (that was a joke by the way!)
When it comes to progressive Rock, Italian groups have the full set of forward gears,and have a habit of engaging reverse only when they have achieved a debut album. I like the way they both fight wars and make Prog Rock.
Controversial point:Best Food in europe too.
Straight outta Florence,this album has to be in the top five 'Best Woprock' (thank you snoopy!)albums ever list. I award it five white flags out of five for its musicianly excellence.....and oh yeah, its got a Mellotron on it!

Enrico Rosa went to Denmark soon after this disc.

In "Catch 22" there is an old man saying "Why is Italy still here after all these centuries?... We know how to lose wars!". He contrasts with all the empires that were supposedly triumphant, but are gone,
while Italy, she still here. So you are so right. And it's got a mellotron on it.

If only Italians went to war with turbo charged mellotrons in reverse,the world would be a better place.......i've got a massibve book exclusively on and about Mellotrons.....its got Mellotrons in it.

Really a great album experience from start to finish. A lot of the italians had top notch music to offer but their (weak) "rock opera"-vocalist ruins everything. The singing on Campo Di Marte's one off works quite well. Sparse and "normal".

There's a handful of titles I'm half-expecting to see next after YS and this.

Indeed, a lot of the vocals are beyond terrible...but luckily there are many albums where these are thankfully limited.
I hope i can offer some that you aren't expecting.....i doubt it though.

Mellotrons?!?, Oh hell yeah, I'm in! The Moody Blues notwithstanding (for any reason really), the first time I realized I was hearing one was King Crimson's first album and I was just enthralled by the thing. Then along came the wave of 'trons being used in the worst possible ways, all limp and ethereal. I'd pretty much given up on them, then Captain Beefheart got his hands on one. I would have never made that connection in a million years, but Don actually made it sound vital again. “I heard them played so many horrible ways that I got interested in getting hold of one of them. The Mellotron’s the only thing that can get that Merthiolate color, you know what I mean? Really abused-throat.” That's the way to approach ‘em me thinks.

Best cooking in the world. The French have the most over-rated restaurant food in the world. Escoffier, the father of French Cuisine, had to go to London to learn how to cook. The story of French cuisine after that is - 1 smother everything in a rich, thick sauce 2 Forget about vegetables - they're for farm animals 3 Take away the sauce, serve everything like it was sushi. Make every plate a delicate sculpture.

The Italians know how to cook fish better than anybody - fresh, light, no sauce. A great pizza is the best meal you'll ever have. Pasta is the best food base in the world, even better than rice, and the only dish improved by a sauce.

I'm not going to listen to the music, though. Those vocals - *shudder*

The most shocking Mellotron moment for me was when the famous white cabinet was spotted among the equipment on stage at a Noel Gallaghers High Flying Birds slot at some shitty festival on TV. I also have a vague memory of another Mellotron spotted behind brother Liam's at a solo performance somewhere shit as well.....surely this is illegal?

French cuisine is almost as bad and unadventurous as french music....ironically,can't wait to get onto French Prog.
French singers are terrible too,but not as bad as those italian ones.

Surely French cuisine can’t suck as hard as Amerikkkan. Is there anything there to compare with Hardee’s?!? Denny’s?!? KFC?!? Texas Road House?!? Cracker Barrel for chrissakes?!? Beyond the poison they serve, I do enjoy the last one’s dba, a racial slur I’m certain is lost on their pot-bellied caucasian clientele, all wondering why their blood pressure and sugar levels are so sky high. Bleeeack! I’ll make a point of loading up on country fried steak w/ white gravy for the Fresh prog to come. Mon oui, bleequch….

Oh don't get me wrong, American Cusine as a hole,regardless of the KKK influence, is on a unique pedestal of awfulness...except for the Italian bits.
OMG theres Corn Dogs!? Twinkies!?...the menu goes on, with two large eggs, as it invariably says for every listing on any american breakfast menu i've ever read!...don't forget Taco Bell. I'm getting a heart attack just thinking about this stuff.
Yeah French aint so bad,its just that the french think its the only food/style that ever existed.