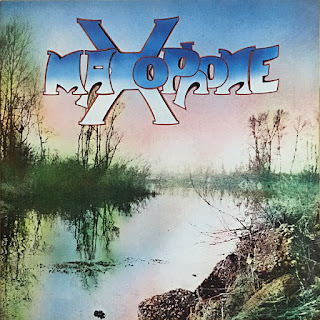 'Stars in their Eyes' was a terrible, cheesey singing show on Uk TV in the nineties,where members of the public impersonated their singing heroes.After a short interview with the suspected Peadophile host, the constestant would say, ...and Tonight Matthew (the creepy host) I'm going to be Neil Diamond,or for example,check out this Greek version of the Show here....can TV get more wrong than this clip of a member of the Greek public as Stevie Wonder?...this is as hilarious as it is shocking!
If there was ever a Prog Stars in their Eyes, Maxophone would have said, "Tonight, we're gonna be Marillion!"
Maxophone were Italy's version of Marillion,who were the UK's Peter Gabriel's Genesis replacements for all those sad Genesis fans who mourned the loss of their favourite bunch of public school boys.....Phil Collins excepted 'cus he was workin' Claahs mate!
Its a very good facsimile of the Gabriel era if you like that sort of thing,but essentially, whats the point?Just listen to Genesis?Or better still, don't listen to Genesis at all!
This is the allegedly inferior 'English Version'.

DOWNLOAD selling Italy by the lira HERE!
Posted by Jonny Zchivago at 09:35

Surely it's the other way round, Marillion were the British Maxophone? Also Maxophone don't sound THAT much like Genesis, the instrumental parts are more like Focus. (Dutch progressives next?)

Also, that cover may feature the worst band logo ever. It looks as if somebody had the idea of a cross between Genesis' Foxtrot/Nursery Cryme logo and Roger Dean's Yes logo, but almost no idea of how to execute such a thing.

Lol!Chronologically, maybe Phil Collins' Genesis, were the British Maxophone, and Marillion followed them? Maxophone got in there first,even when the Gabriel mob were still functioning.
Yeah, its the voice that screams stars in their eyes Gabriel.
It's gonna be Iron Curtain Prog next, some truly horrible things lurked in the Soviet Bloc.
Not got much in the way of Dutch Prog except for the aforementioned Focus. Got some rather dodgey Belgian Prog however.

Genesis was my introduction to the English class system. The U.S. class system presents very differently--can you imagine Serial Rapist-in-Chief, Donald Trump, as a member of Genesis? So studying Genesis as a youngster proved quite instructive, and I learned to identify the Tony Banks/Mike Rutherford sorts with ease, which proved useful later in life.

Supersister.yeah i got them.Mainly because i have a daughter called Nancy, so i have the album with Nancy in the title. For some reason I have never had them down for Dutch.....but for course they are.They sound very English;not many non-uk countries can achieve that questionable talent Not that i'm gonna do a dutch prog week at all.....then again!?

Is it me or is Tony Banks the most boring fucker in rock?