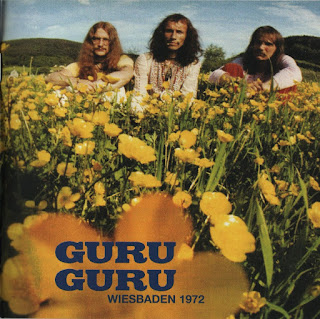 Our favourite teutonic free rock trio take their lengthy freak-outs to Wiesbaden, as they approach the "KanGuru" album era.A suitably ragged set is unleashed on the sparce audience in the Wartburg Pub on november 4th 1972,and then some clever fucker recorded it!? Then an even cleverer fucker made it available for free download.

DOWNLOAD this not too bad un HERE!
Posted by Jonny Zchivago at 18:24

It looks like the guy in the left didn´t remove the red trousers since Essen 1970. Trousers longevity in krautrock may be the topic for a new Simon Reynolds book.
As it was pointed out in the blog, the great thing about krautrock is the effort to be themselves rather than copyng american or british music.
It must be strange to think that your father had to bomb the place where this wonderful noise comes from. Not nice on either side to see your old man going to war.
I can understand Wolfgang's sensitivity to corrosive humor but the fact that you share all this music is also a healing process. It's one of the few blogs where I bother to read the comments by the way.
Keep the good stuff coming . Cheers from Patagonia Argentina.

I dread to think what the state of the trousers of the audience would have been in?
I like to think that my father played a part in freeing future Krautrockers to make the marvelous music of the german post war generation.Without the RAF bombing the Fuck out of the Nazi Regime we'd all be listening to Wagner instead of Guru Guru, Can, Faust, Kluster etc.....he deserves a medal for services towards culture,well, him, and the Soviets.
Patagonia, Argentina???....you're no related to any of those escaped Nazi war criminals are you that escaped to....er Patagonia after WW2?....maybe even the Fuhrer himself....ref 'Grey Wolf'