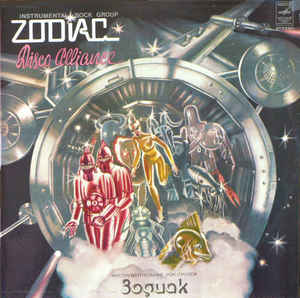 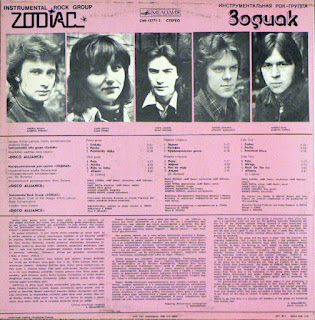 It's 1980,the year of the Olympics, the one when nobody went because of the Soviet Invasion of Afghanistan, and Disco was hitting big in the Baltic states.
Meanwhile ,in the students' club of the Latvian State Conservatoire of music, Janis Lusens (a Bloke by the way!) organized a rock-group, named "Zodiac". Their first album, "Disco Alliance",turned out to be the Soviet "Dark Side Of The Moon" if not for its spacey themes,then for its persistence in the Soviet charts. LP's, issued in large quantities, sold out immediately in every corner of that huge drab empire.The Melodija pressing plants were straining to keep up with demand, even with their low grade pressing standards, and cheapo sleeve printing.

Zodiac's mid tempo instrumental electronic rock had everyone dancing like the zombies in the 'Night Of The Living dead',from deepest Siberia to the Kremilin ballroom.Even leonid Brezhnev was seen tapping his foot to this classic Latvian cheese, momentarily before he had to stand and endure the mayday parade of nuclear missles.Ironically the very things that destroyed the USSR.Their incentiveless economy was drained dry by spending all their roubles on those rediculous ICBM's.
The only joy the proletariat had were the unannouced record releases that state label Melodija turned out.Your average Comrade only had to look at the front cover and read such forbidden pleasures as 'Instrumental Rock Group' that adorned the terrible cover of Zodiac's magnum opus, and you were away. The word spread quickly that there was a new Rock group from the glorious republic of Latvia, and everyone wanted one. Not easy to supply millions of albums when your industry runs on sludge. No-one knows how many copies they sold ,but it must have been over a few million.
It's a sort of cross between 'Dark Side of the Moon',BBC Testcard music,Georgio Moroder and 'Stars on 45',all the way from the Dark side of the Earth.

DOWNLOAD from the dark side of the earth HERE!
Posted by Jonny Zchivago at 19:01

as a proud Latvian American, I salute you and thank you for this gift, buried as it were, in aural amber.

I bet you have very little time for American Lithuanians and Amero-Estonians?....i noticed that nearly all the decent music in the USSR came from the bamtic states.
I did go out with a Scottish-Lithuanian girl for two spells of three years....she was a bit aggressive.

Of course i meant the Baltic,not the bamtic, states, my team just went 3-0 up!

Scottish Lithuanian!!!! You let that passion beast get away?....

i was prepared to defecate all over this one, but between the chintzy electronics and its un-danceability, I quite like it. Beats the fuck outta western disco of the time.

I'm afraid I did Kevin.....twice!?....she was just dangerously jealous,it was a life or death choice.I'm sure you'll forgive me?

Indeed Rev...i was full intending to take rip the piss out of all this Iron curtain stuff, but i'm ending up liking it.....even the really crap stuff.
As I said before...define 'Crap'.....in two words its easy i suppose...Meat and Loaf.......even easier in two letters...U and 2.
But generally accepted 'Crap' is crap because?????.....Meat Loaf would say that this album is crap....that says it all.