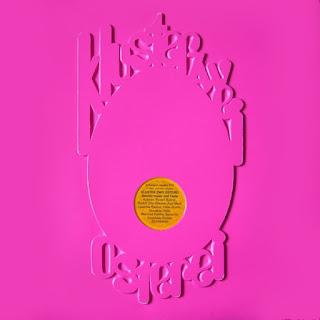 Oh Shiiiiiiit!....Just hearing the voice of Manfred Paethe, as a teutonic version of Larry Olivier doing Richard the Third,but in the Gestapo. Gives me waking nightmares of being interrogated by a psychopath with the backing of the state. This is the music ,or more accurately Non-Music, that plays as you wait for electrodes to be applied to your balls,or the hammer on the inside of your knee,before they dunk your head in the bath of shit.......but you don't know anything! Not that knowing something will save you of course. Such is the power of the German language,to send shivvers down the spine,and hair stand on end,even on my bald head, in sheer terror!
The music/Non-Music, is the essence of the scraping violins from Hitchcocks "Psycho", but slowed down to a grating crawl,like a slowly inserting knife in the liver.The voice, that Voice, is the blade twisting.
Is this the very first Industrial album?....I reckon it is,or its sister album "Klopfzeichen",whichever was released first.
Its beyond merely Avant Garde, its Avant Industrial.Recording the noise of the modern planet and feeding its horror back at us.
Krautrock this is not, but it gets lumped in there with Guru Guru as the same stuff,that German Stuff. Like all the Kosmiche musick,it ain't nothing to do with Rock whatsoever.
After another couple of official albums in 1971, Konrad Schnitzler went solo, and the remaining two (Mobeius,and Roedelius) changed the 'K' to a 'C' and became ambient legends Cluster.Three people who have,possibly, never made a (s)hit record......shiiiiit!

We have ways of making you DOWNLOAD HERE!
Posted by Jonny Zchivago at 00:44

Yes, that one is great (don't like the Guru Guru stuff). Three years before the earliest known recordings by Cabaret Voltaire and four years before "Metal Machine Music"!

Btw, that Manfred Paethe (a stage actor I don't know) tells strange things about death and resurrection, poisoning the environment, pseudo-religious stuff … in a manner and language as reading from the bible. Don't know what this is about.

Ah, just read on Wikipedia: "According to Conrad Schnitzler (…) an advertisement by an organist interested in new music led to the recording session being sponsored by a church. Kluster was required to add religious text to the first side of the album to obtain this sponsorship. (…) The text was written by Rudolf Bohren, Kurt Marti, Dorothee Solle, Rudolf Otto Weimer, Lisolette Rauner and Hilde Domin. Schnitzler describes the text: "If you don't understand the German words, it sounds better. [...] If you know what it means, you'll find it terrible." "

So it's not interesting or important, otherwise I would have offered to translate it. :)

Indeed, listening to the Vinyl on Demand box set, they were first with the Power Electronics thing too.
Yeah, i never listen to the words anyway, so if its in a foreign language i don't understand that suits me just fine....especially if its religious text.

Phew! At least we dodged the Guru Guru *bottom* album cover! Thank you! :)

yeaH,...hINTEN?...was gonna do that one, but...nah!..i'm trying to hastily get on to Italian Prog. Sick of krautrock.

Agreed, this lot has yet to put out a bad record.

"Recording the noise of the modern planet and feeding its horror back at us." A laudable pursuit. I'd like to lock a lot of well known corporate/potitical/industrial types in a room with this sort of thing blasting away at 11 for 72 hours with no break. It'd be great if it could affect a change in their mostly reprehensable viewpoints. Not very likely, it is? That said, it would still be worthwhile if only to force feed their ears the sound of the dystopia they've had a guiding hand in creating.

Not really sure what I'm getting into with this, but I think I'm glad I don't understand German. Thanks.