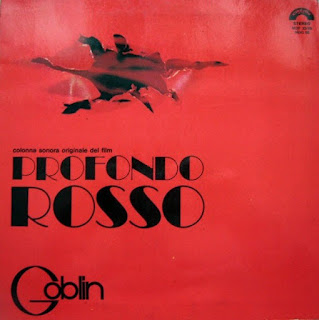 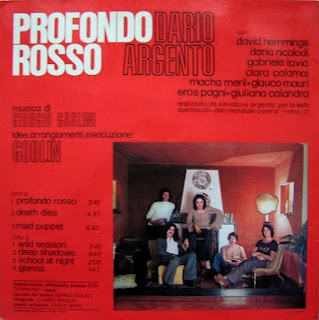 Like a bit of Goblin do ya? I bet you do, you filthy fuckers!
Well what sensible young man wouldn't?...I say 'man', because women don't like prog rock......period (pun intended).
Especially if its a groovy Italian Prog soundtrack album that thinks its a cross pollination between "The Exorcist" and "Dirty Harry".
"Death Dies" is a funky groove ridden contrafaction of Lalo Schifrin's peerless "Dirty Harry" soundtrack from 1971, but progged up a notch.
"Mad Puppet" is a slightly altered, copyright infringement dodging, version of Mike Oldfield's "Tubular Bells" side one. Luckily Michael is so rich he couldn't give a rats ball-bag who steals his work anymore....if he ever heard this uber obscure soundtrack ever,which one doubts greatly.
The title track sounds uncannily like the theme to "Halloween",or one of John Carpenters other self penned soundtracks...maybe he stole this from Goblin,as his soundtrack career started around the same time.If he did, Goblin certainly have no grounds for complaint in the plagarism department.
I've added the film versions of the best tracks as a bonus for you lucky sods.

DOWNLOAD after a prolonged bout of Goblin HERE!
Posted by Jonny Zchivago at 23:48

What is now a while ago I was living with a woman who was a complete Argento nut and she was always going on about the soundtracks / incidental music etc.

So I bought her an absolutely mint Italian copy of this and Susperia. She never even took the vinyl out never mind played them. When I ended the relationship, she took the records with her. Now that I have had the time to think about it, I miss the vinyls much more than her.

That evil Bitch!
I might do Suspiria too then to help you get over the loss of your vinyls.

Did you ever hear the bit about how Mike Oldfield stole the main Tubular Bells theme from Christian Vander/Magma? Apparently, they were recording in the same studio and Oldfield overheard Magma. It's documented! It's on one of those Magma outtakes discs, can't recall which one though...

No, i'm not up on Mike Oldfield goss.......one thinks,why?
Sounds like a Magma theme,so wouldn't rule it out.
Or maybe Goblin nicked from Magma,and Oldfield nicked it from Goblin? Or,Maybe Magma nicked it from Oldfield?...without nicking stuff no-one would have any original material.