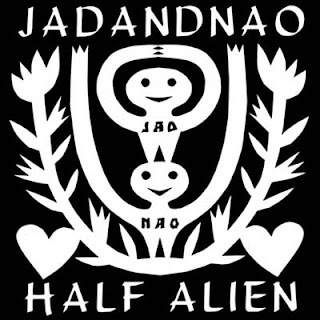 Two living legends of DIY outsider otherness, Jad Fair of Half Japanese and Naofumi Ishimura of Yximalloo , got together to make a triptych of albums in the nineties and noughties.
Picasso said, and i've quoted him before in these unhallowed pages:
"It took me four years to paint like Raphael,but a lifetime to paint like a child."
Now these two 'Artists',and they ARE indeed 'Artists', had one up on Picasso,and missed out the Raphael part.While dreary unit shifters like Marc Knopfler spend a lifetime trying to play like the musical equivalent of Raphael,whoever that could be(?).Jad and Nao came out of the womb already painting and playing like a child,but had the good sense to stick with it for a whole lifetime.
This, the second of a series of three (so far?),has more of a hint of Jad Fairs work rather than Nao's;but thats mainly due to Jad's singing spread all over the 40 tracks,not to mention his reasonably proficient drumming.I could in fact prefer this collaboration to either one's nineties solo work.

DOWNLOAD two halves of the whole HERE!
Posted by Jonny Zchivago at 13:21

The words of Pablo himself followed by yours about Jad & Nao are very comforting to me and my own musical way (:

We talked some days ago with friends about that (it was about the musicality in Aphex Twin that bore me) and I only penibly could explain (fortunatly it was in french) the difference between "to play music", "to unlearn music" (that seems to me like 2 pretentious domains) and "to experiment musical things and sounds". Those pretentious domains can produce great musical things as much as untasty and boring demonstrations, just like experiments can turn magically great or unfortunatly to shit. The difference resides in pretention that is intrinsically present in Music, (the only fact of being "Music" is a prentention regarding to sounds like the unlearning of music is a pretention regarding to music) and optional in musical and sound experiments.

So it is hard not to be too pretentious in music (and it's deconstruction) and hard (for instance expensive^^) to be too prentious with experiments...

If you like unproduced and unpretentious (or not too much:) low-fi songs from the '80s in a Residents way, you should try this: https://archive.org/details/EscapedFromTheTapes
then, following that link, there are many cheap and too-underground-to-be-true things...

These are just the kind of discussions that Jad Fair and Nao never have.You either get it or you never will.......or take a lifetime working at it,but ultimately that's fake. It ain't possible to Unlearn anything once its polluted ones mind/soul....but you sure can pretend you have.So you are correct that trying to paint etc like a child when you know otherwise is indeed "Pretentious".
Probably "re-learning" is a better way of embracing the honesty,innocence and profundities of childhood. A mixture of Raphael and the kindergarten?.....like The Residents (before the emulator of course?).

I like the idea of a never ending discovery/evolution,
in music same as in kitchen (same as in orgasm:)
and in the comprehension of the world...
That means not to learn too quick and to focus
on what is concretely useful at the moment,
not on any global knowledge.
I think it's important to keep parcels to have ideas,
no matter if they've already been materialised before,
to reinvent things is the best way!

Raphaël's parents should have save his first drawings before school
but nobody did it I guess (?)

And the Residents... the Emulator just clearly readable during the 13th
birthday show, the group was emulated too :) except Snakefinger :(
Their earliest recordings (like the WB project) looks more like a
mixture between a psychiatric hospital (before the evening's pills)
and a music-instruments'shop to me... They had a long and brilliant
decade of evolution before to became something else...