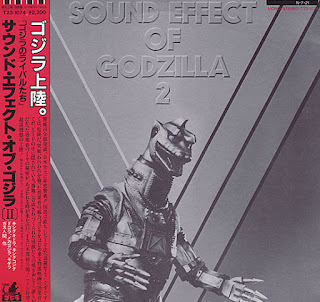 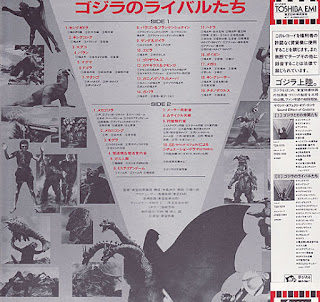 Why were these guys soooo angry?
Most animals fight each other for breeding rights or food, but these creatures seemed to just want to fight each other purely for the right to smash up Tokyo. If they wanted to fight for the right to smash up cities that deserve smashing up like Coventry or any urban sprawl in the west midlands of the UK(except Leamington Spa),or 90% of the US Bible Belt, then I'd understand.
Admittedly, most of the destruction occurred during the fights,but that could easily have been avoided by moving the conflict to the countryside,or Monster Island,like they did in 'Son of Godzilla'; where Godzilla and Minilla(the son) got a royal pasting from a bunch of giant ants.Ants ,who were created by man's ill advised meddling with the atmosphere.....a very topical subject today I may add.
I absorbed all of these preposterous movies in the eighties on a Friday night after staggering home from the Pub.Through the haze of alcoholic excess they started to make perfect sense.
'Godzilla vrs Mechagodzilla' became the Citizen Kane of Monster movies.I watched open-mouthed as the seemingly endless battle went on and on.......and on. The medium of cinema couldn't get better than this I thought.....then I sobered up.
Alas the noises created for this series of nonsense had a certain essence that being sober couldn't remove, so here's volume 2 of Godzilla SFX.This time collecting together an array of the big 'G's 'Rivals' with whom he or she, had many a lengthy pitched battle.
If there's another Godzilla movies made outside of Hollywood, I would rather like the soundtrack to be made by Merzbow and chums from the Japnoise underground. Guaranteed to empty cinema's everywhere.

DOWNLOAD and destroy a small town HERE!
Posted by Jonny Zchivago at 11:05

I really wouldn't know what you're alluding to?

Hey there! I've been following your weblog for some time now and finally got
the courage to go ahead and give you a shout out from Houston Tx!
Just wanted to mention keep up the fantastic job!

Good question. Why are these beasts turning on one another? The entire Japanese navy is just standing around waiting to douse the loser in soy sauce.

Watch out Mothra,the Japs have kamikaze Sauce bottles with your name on them.

Those japs will eat anything....although Mechagodzilla is safe,unless they like stainless steel with noodles.

Ha! I think we've all been forced to eat metal at some point.

Little known fact: Throbbing Gristle's music appears on the monster movie 'Thunder of Gigantic Serpent', without their permission (and possibly their knowledge).

Persons engaged in this discussion may recall Japanese good guy super hero Spectreman, a guy named George (because it's such a common Japanese name) who unbeknownst to his colleagues at the Tokyo Pollution Control Center (or something like that) becomes Spectreman to batter attacking giant Godzilla-like foe, including a behemoth flying sea turtle powered by three jet engines.

The curious bit: Spectreman could make himself any size he wanted to, yet he always made himself only equally as large as whatever foe he had to vanquish. What's with the fair fight nonsense? Wouldn't you rather blow yourself up to like five times the size of your opponent and crush the living shit out of them much more handily? Seems like a somewhat clueless super hero by that score.

There was a Spectreman vs. Ultraman episode, but I don't recall who won.