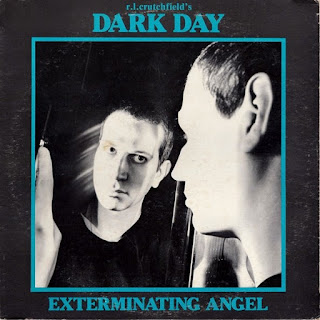 The Gary Numan of Manhattan's first Dark Day LP is from the time when electronic acts still used real drummers and guitars like The Numiester himself. Mainly due to a lack of a decent drum machine and syncing problems. On his second album, "Window" he uses that cheapo organists drum module with the preset rhythms we have heard on hundreds of tunes of that epoch. So this debut outing, after the end of his tenure in DNA, steers towards the doomy synth punk end of the woods.
A transitional record which would lead to a purer, and darker, form of minimal synth pop.


DOWNLOAD the dark angel of no wave HERE!
Posted by Jonny Zchivago at 11:18

In my humble opinion, this is the best record from Dark Day.
Carlo

Happy New Year! I mentioned in the comments section of the 'Windows' post that I would love to hear this album and as if by magic...!

What amazes me about the first two Dark Days albums is how they came out of the DNA/Mars/UT No-Wave nexus and thus represent a continuity in one sense, and yet have such a different sound, one that appears to pop up out of nowhere, fully formed (it makes me guess he was listening to the sound of his British DIY post-punk synth compatriots).

Having said that, there was a synth precedent in American underground music with Suicide and Chrome for example (and the recent Chrome posts by that nice Mr YassWaddah man on his blog of the Blood On The Moon and Into The Eyes Of The Zombie King LP do illustrate a similar feel to the two Dark Days albums) and of course there is the mysterious US synth band Onyx from around that time, who made some of the most incredible music imaginable).

An excellent Dark Days double whammy and a fitting end (along with your mixtape) to a wonderful year of music from DIEORDIY.

PS> Do like the new Bow-Wow-Wow C30, C60, C90 Go! blog background art work, not that the old one wasn't perfect, but new year, new... and all that. Reminds me of proudly going to school after Christmas armed with the Your Cassette Pet tape and my knock-off Amstrad 'walkman' (it is most bizarre what memories one chooses to select and remember out of the millions we accrue).... now to just get the refrain of "Radio G String" out of my head!

As minimal synth,as its now called,goes, Suicide and Chrome had more to do with Rock'n'Roll than something new. Fantastic as they were. Silver Apples were one of if not thee first synth duo,and a direct influence on Vega and Rev(I once interviewed a reformed Silver Apples for a fanzine in the 90's,after saying i was from the Guardian,then snaffled all their post gig booze). Dark Day and music of that ilk, is just so alien to the American Psyche.
I'm ashamed to say I know not of any Onyx,i perhaps confused the name with the Brit-Psych band of the same name!?
Glad you like the new design, the Bow Wow Wow single was a fine rallying cry against record company fascism,some of maclaren's finest lyrics.I got 'Your Cassette Pet' for crimbo that year as well!...featured somewhere on this blog I think?

Anyone knows where can I find to listen the other albums (Obsession, Beypnd the ePale, Darkest Before Dawn,Strange Clockwork)?

Thank you sir! what a great record! will get a daily spin in the next days. This is so far from DNA's wall of noise. Totally unexpected!