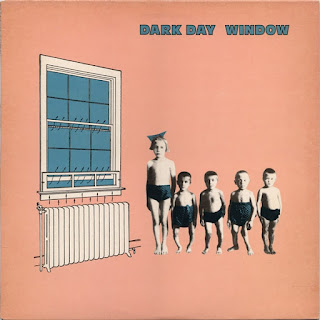 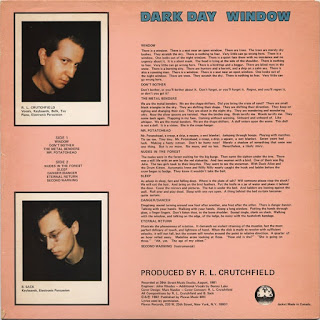 Not all American Synth Pop was clueless of course,although I'm not too great a fan of the first dark Day LP,the second, 'Window', could have easily been from the reject pile in Mute records office, or an underground cassette from Frankfurt.
You would never believe that the main protagonist of Dark Day was in legendary No-wavers DNA!
Robin Crutchfield's voice could easily pass for one of those androgynous English chaps in those electro-pop duo's of the early eighties.Hopefully this is natural,and not an attempt to be mistaken for English so he gets signed up? Undoubtedly Robin enjoyed having his Crutchfield (geddit?) by male groupies ; or by his collaborator, a certain Mr B. Sack (The 'B' could stand for Ball, but its misspelled as Bill, how boring!).
Dunno what it is that attracts Homosexual Men to synth pop,but they seem to be essential to make a listenable dark pop tune with synthesisers.
Pretty good stuff,and as a 'Metal Bender' myself, as in one actually bends metal into art/craft pieces,not the other English slang term for a Gay,(ie 'Bender'); I will be using track three,"Metal Benders", as my work website theme tune.High praise indeed?
Basically, they sound like a doomy, slowed down,lo-budget Depeche Mode(Post Vince Clarke) fronted by a depressed English public school boy, or drama student.

or DOWNLOAD for a brighter day HERE!
Posted by Jonny Zchivago at 11:22

After being active in DNA with Arto Lindsay and Ikue Mori, Robin Crutchfield form the Dark Day in '79 with Nina Canal (UT) and Nancy Arlen (Mars) then come into training Steven Brown, Peter Principle, Jarmusch, again Nina Canal and D.Rosembloom. In '80 he released their first LP "Exterminating Angel" created together with Phil Kline and Barry Friar. They play at clubs like CBGB's, Max's Kansas City, Hurrah's, Trax and M-80.
We are at the beginning of 1980, in full emergence of NO WAVE, a period that gave its highest artistic expression in all areas: painting-graphites (Basquiat), video art, cinema (Jarmusch, R. Kern, N. Zedd, Vivienne Dick etc) with a prevalence of films shot on super 8 and 16 mm and in the music that gave birth to groups that now are part of the story. DNA, Richard Hell, Mars, Teenage Jesus & The Jerks, Lydia Lunch, Contortions, Patty Smith, Debby Harry, Suicide, Bush Tetras, Foetus, Sonic Youth and many others. Crutchfield made a Dark, gloomy and cold music with an obsessive rhythm and a monotone voice. After a few singles released in '82 and the second synthetic LP "The Window" with Bill Sack. In '85 Crutchfield only owner of the group left the experiments to make medieval chamber music. In '89 comes "Darkest Before Dawn" for Night Eve Production, his label. In 2003 he released a new CD "Strange Clockwork" (self-produced) but we are very far from the atmosphere of Exterminating Angel. Since then, nothing.
R.I.P.
Dorothy

I love this record. This is the stuff.

Robin Lee Crutchfield gave rise to the more electronic/dark/rock music of history, music that crosses the dark-punk of Joy Division and the moral vacuum of the decadent literature of vampires and the "boredom" of the existentialists. The manifesto of his project was the 45rpm "Hand In The Dark". Dark Day repassed without ever get excited about the constructs based on traditional harmonic melody.
The album Exterminating Angel (Lust, 1980 - Dark Entries, 2012), a tribute to the classic Luis Bunuel, cataloged a number of these thrilling pantomime of nowhere. Everything moves slowly, marked by mournful tunes and in view of a total desolation, and lethal. The choruses and rhythms keyboards hypnotize more than traumatize with obsessive iterations in an almost minimalist. Crutchfield accompanies them reciting (not singing) the few verses, oppressive and paranoid, icy voice of his lyrics and mournful, as lapidary as indolent, interspersing frequent and long pauses that make nerve-wracking waiting for the next verse. Spleen and anguish dominate the atmosphere of those who are tone poems on the small gray monotony of everyday's ceremonial music with oriental inflections (the instrumental Raven's Wing), tribalism claims (Arp's Carpet), epic rides (Chameleon), poignant laments ( Flightless Birds), robotic ballets (the anti-nihilist anthem No Nothing Never), culminating in growing creepy Trapped, majestic and terrible procession of ghosts.Window (1982 - Dark Entries, 2012) off another sequence of chants from desperate Crutchfield's rosary hallucinations, a Dada claustrophobic withered in the ruined castle of Count Dracula. Here too, the title track, an instrumental metronome and synthesized on the performance Middle East, sets the standard to which they relate all the songs, by the fanfare of martial Nudes In The Forest catalepsy gloomy Sleep. The rhythm and melody, simple and linear, more suitable for folk dances that transcendental meditation, refer to fantastic landscapes and exotic ideal backdrop for millennial occult ceremonies. In this soundtrack Crutchfield whispers entranced his litany of paranoia and claustrophobia. The apathy of sound commercial decrees the death of Dark Day. The next work, Beyond The Pale (1986), was released on cassette only privately. It's a collection of instrumental disturbing, built around the Gothic and medieval sound of an organ, and with rhythmic percussion from castle horror as rattles, bells, bongos. Crutchfield will continue to perform dances of the pagan supernatural with Darkest Before Dawn (Nigh Eve, 1989). Collected 1979-82 (Daft, 1998) collects the whole repertoire. Crutchfield later tried to resurrect Dark Day with Loon (2000), The Happy Little Oysters (2001) and Strange Clockwork (2003).
Gerard L.

Absolutely stunning music, I have wanted to hear this and the first album for ages
- I found a rip of the Collected 1979 - 1982 CD a few years back and I still play it to this erm..dark..day. Some of the music still sounds like it's from way in the future - such a shame that Dark Entries have only reissued the first two albums on vinyl as it would make a great CD.

Kudos by the way to Dorothy and Garard L for the above comments, very informative - I didn't even know there was a UT/Mars connection (back to No-Wave school for me).

PS> Before someone comments that they can't d/l this rip from MF because of the copyright madness, just close the MF tab down and then re-open the link and as if by magic, the copyright cops have scattered and sanity is restored (along with a download button).

I'll re-up this to google,i should have guessed this would have copyright problems.

Excellent! Thanks for the continuing education!

beautiful blog, you best thx. any chance you got Dark Day • Hands In The Dark (1979)
looking bad for it. thx again

THX BUDDY YA THE BEST