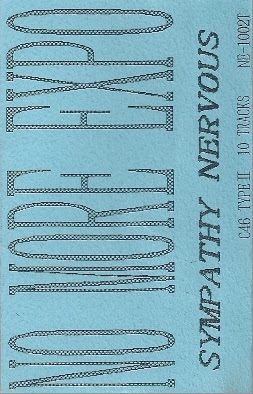 Japanese cassette only proto-rave electronica from the year zero of 'popular' synth music. This could easily have been recorded yesterday,and as far as some modern musical forms are concerned, it sounds like tomorrow.
Inspired by the electronic German groups,why Yoshifumi Niinuma isn't mentioned in the same breath as Manuel Göttsching in regards to making the first House/Techno record, i really don't know; as this was released four years before "E2-E4".Maybe because no-one gave a shit about Japanese music in Europe,and no-one had even heard of Sympathy Nervous even in Japan?Blame obscurity?
This is better than "E2-E4" anyway, that particular landmark was more Trance-y than this tape I suppose,so it has that guilt to bear at least.

A1 No More Expo
A2 Music Of The S.N. Phase-1
A3 Lace Master
A4 Khahi Cloud
A5 My Favorite Patch
B1 Money Crisis
B2 Heart Of The Sun (Roger Waters)
B3 Pale Port
B4 Spirit Of The Bomb
B5 Mescal

DOWNLOAD and expo no more HERE!
Posted by Jonny Zchivago at 11:10

This really isn't a music related comment for once. I just wanted to thank you for your hard work and dedication throughout the year in finding and sharing these gems with the world.
I was a tad young to remember some of them, but second time around, with a bit of maturity under my belt, they are all classics.
Have a great 2016. Die or Diy is my go too for new (old) music. I'm discovering great new artists and music every day virtually. Long may you reign.
Happy New Year Johnny.

As Jesus said on the cross, "Cheers Judas, and have a Happy New Year."

I might be Mr. fancy pants smart ass party pooper here but I hardly doubt that these recordings are from 1980. Not only the compositions but also the equipment does sound more like late '80s or early '90s. The Linn LM-1 was released in 1980 as the first "commercial" (well, 500 items were build) sample based drum machine, and it sounded quite different. Also the arrangements here actually sound like based on MIDI (there, I said it) or "advanced sequencing" to me, both not established by 1980. There's a bit of discussion about the recording/release date of these tracks online, but nobody seems to know the real date (yet):

Anyway, good music is good, no matter when it was recorded. Thank you for this! And happy new year :)

Well, Mr Fancy Pants, I can't wholly disagree with you.It could easily be anywhere from the early eighties to 2015.I suppose that would explain its future sounding tunes? But i am a fan of myth building in popular music,so its staying 1980 until proven otherwise.
Thanks for your insightful analysis.
Yup, its good anyway.
Happy new one to you too.

No, actually I haven't. Thanks, I will check. You mean "Plastic Love", right? http://minimalwave.com/releases/release/plastic-love/

Yes that's right Mr fa.....whoops nearly did it again! Mr musique. I think you can stream it on a few free sites.

Thanks for the link. For closure: I realised, that I was listening all the time to files that I downloaded from a differnent blog years ago: http://atlantisaudioarchive.blogspot.de/2012/01/sympathy-nervous-no-more-expo-negative.html (via rapidshare, so the files are offline now)

That version has totally different music and equipment and seems to be a fake or something. So I revoke, your tape sounds quite 1980-ish.

Very noble of you,thats a rare thing in the comments section.Having cross referenced 'plastic Love demo's 1979-80' there seems to be about five tracks from this cassette on there. So i think we can finally say 1980....but its definitely NOT 1979.