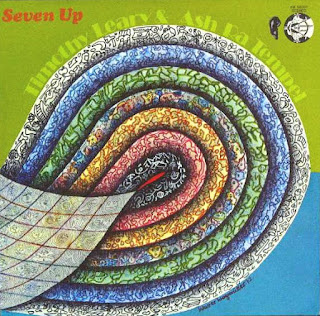 On the run from prison after he got busted out by The Weathermen, Leary ran into English counter-culture figure Brian Barritt, who introduced him to the still existing Psychedelic scene in West Germany that came to be labelled 'Krautrock'.
A suitably confused abstract rock'n'roll record was assembled for Timothy's vocal talents,and is without doubt a Psychedelic classic.
Likely made while under the influence of a certain psychoactive chemical, the result is quite wonderful,with Manuel Gottsching's lysergic guitaring surrounding Tim and Brians unhinged lyrics and singing.
Brian and Timothy's relationship deteriorated somewhat by the early 1980s with Leary describing Barritt as a 'lying junky' in his autobiography, Flashbacks;But at least they made one of the better freak-out albums of all time for us to remember them by.

DOWNLOAD the upload HERE!
Posted by Jonny Zchivago at 23:00

Right On! I've been hoping this would show up. I have the LP but no functional turntable so I'm really looking forward to hearing it again. Many thanks!