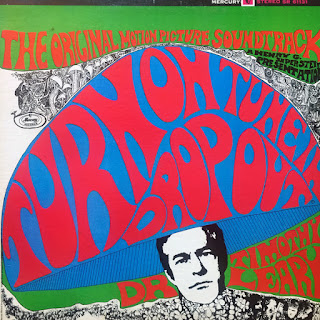 You've heard the record,read the book,seen the lecture? Well now we have the Movie of your journey into personal disaster and irreparable mental breakdown.
Drop some pharmaceutical grade LSD and listen to this soundtrack of the movie version of a 'Trip',with your guide Dr. Timothy Leary, and you may never come back.A chance to escape the prison of 'self', and live out the rest of your mortal tenure in cloud cuckoo land.
Your Brain is a delicate organ,and evidentially speaking,its nothing more than that.Not the slightest hint has there been of eternal portals into the kingdom of God,travels in space time, or Intelligence increase? Alternatively Plenty of evidence exists of irreparable damage to ones mental faculties.There's a long list of sixties psychedelic pioneers,or victims, who became nothing more than Human craters ,not because their souls have left to a celestial paradise,but because their synapses have been irreversably fried.
Don't do it kids,the scouting party of the sixties did it,and the reports that came back were not encouraging.
Great super weird records were the result, of which this masterpiece of Psychsploitation, is one of the weirdest.

DOWNLOAD turn on tune in but don't drop anything HERE!
Posted by Jonny Zchivago at 17:18

As a serious user back in the day I knew of Leary and followed his escape to - I think it was Morocco - on the news, though I lost interest in him long before his legal problems ended. I don't think I ever heard more than short bits of any of his recordings though I do have "Seven Up", the album he made with Ash Ra Temple in the early '70's. I'm going to give this a listen. Many thanks!

Hi, Algeria i think?
Reasonably original copies of "Seven Up" are going for around 200 quid on discogs. It will be posted here in a few days time.Its a classic.