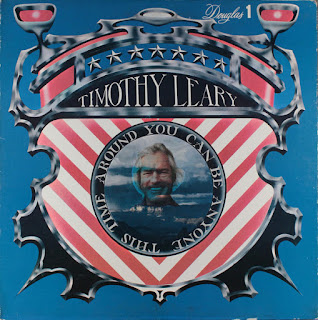 Astro-biologists, philosophers, priests, healers, observers of the fleshly heavens and cosmic dancers dig this recording Pressed to wax in the Age of Aquarius, Dr. Leary's psychedelic monologue "What Do You Turn On When You Turn On?" identifies our brains as "the galactic headquarters of the nervous system" and the locus of all social transformation.

Yes, you can be anything this time around.....mostly a drugged up arsehole or sectioned in a secure mental institution.Grim reality sounds real fun doesn't it kids?
This features the one and only Jimi Hendrix on track one side one,and its probably the fourth best album that he appeared on.
Douglas Records has a valid argument for being the first 'Rap' label,with The Last Poets,Lenny Bruce and the psychedelic white Rap miester that is Dr. Timothy Leary Ph.D.....(a great Rap alias or what?)....all on the label in 1970.
A record that doubled as the coffin lid closing on the sixties.

DOWNLOAD and be yourself this time around HERE!
Posted by Jonny Zchivago at 00:24

It featured Hendrix on bass (track 1) with Stephen Stills and John B. Sebastian on guitars.